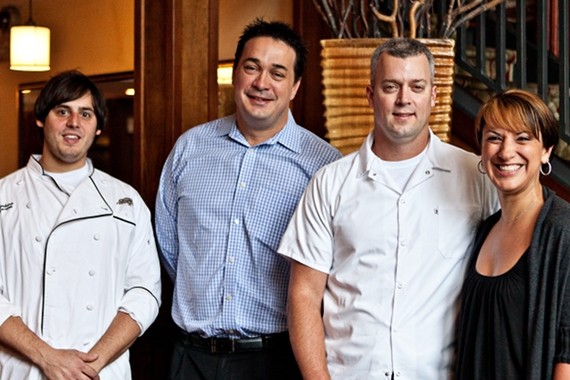 The Indigo Road and Steve Palmer announce that Jeremiah Bacon will join Oak Steakhouse as executive chef and partner.

In searching for an executive chef, Palmer wanted to stay local but also hire someone with a seasoned resume. “Jeremiah is a huge talent with experience at world-class restaurants such as Le Bernardin and Per Se in New York City, and we are all thrilled to have him join us at Oak,” said Palmer, managing partner of the restaurant group, which also owns and operates O-Ku Japanese restaurant.

Bacon will take the helm of Oak in mid-November and add his touch to the menu, which will include taking it in a progressive, yet local direction. Bacon said of his new role, “the farm- to-table program is one that I’m deeply committed to and I look forward to further establishing this vision within a classic steakhouse setting.

A Charleston native, Jeremiah Bacon graduated from the College of Charleston then moved on to the Culinary Institute of America (CIA), in Hyde Park, N.Y., to pursue his love of the culinary arts. After graduating from the CIA in 1999, Bacon moved to New York City where he worked for legendary restaurants The River Café, ILO, Le Bernardin and Per Se. While working at Per Se, Bacon was profoundly influenced by owner-chef Thomas Keller’s vision of locally sourced and seasonally harvested ingredients. He has incorporated that philosophy into his practices and has built strong relationships with local farmers and fishing community since moving back to Charleston.

Palmer had initially secured John Zucker as executive chef for Oak but the two were unable to reach an agreement. “John is a beloved member of the culinary community in Charleston, and we were very excited at the prospect of working with him,” Palmer said. “I wish John continued success with his Cru endeavors.”

“It's unfortunate it didn’t work out and I only wish them the best,” said Zucker. “Oak is a great asset to our culinary community as is Cru Café and Catering, which is where I will continue my culinary focus.”

In the interim, Palmer was pleased to place Joseph Jacobson, an Oak veteran, as chef de cuisine for the restaurant. Jacobson has spiced up Oak’s menu in recent weeks with seasonal additions such as pan-seared foie gras, duo of duck and the new bone-in ribeye. Palmer also brought back long-time Oak employee, Michelle Pavlakos, to help run the front of house and facilitate special events for the restaurant.