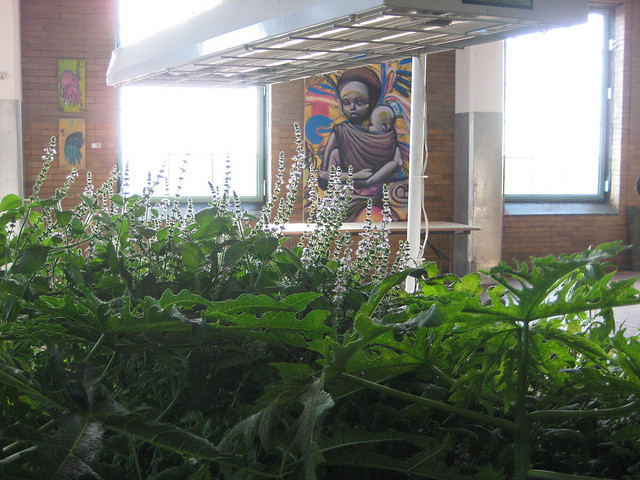 6:10 am on Tuesday November 13, 2012 | Posted by
South Carolina vertical farming initiative might be a model for the future

According to the the Food and Agriculture Organization of the United Nations by 2050 the world's population will raise to 9.1 billion people and we will have to increase our food production by 70% to meet those needs.

Try as we might, 'more land' isn't really an option, however, instead of "growing out" we need to start focusing on "growing up". WBTW reports that,

"Researchers went to Charleston [...] They saw a unique opportunity to study ways to address food shortages. The idea is to take vacant buildings and build a vertical farm.  Unlike traditional techniques, the method involves multiple levels of food growth, controlled cooling, heating and lighting systems which are used to produce year round crops. It's an innovative farming method that can maximize space but comes with a big price tag."

Even Though the project is still in the planning phases, the Environmental Protection Agency says that the project in South Carolina could act as a model for food production in the future across the country.

WBTW's write-up has a great broadcast of the report where they also speak with Sam Bellamy of  Indigo farms who understands that farming techniques have changed greatly over the last century but is weary of vertical farming because he believes that we should all know exactly where your food comes from.

Hop on over to WBTW and give it a read and watch the broadcast.

Agriculture in the 21st century faces multiple challenges: it has to produce more food and fibre to feed a growing population with a smaller rural labour force, more feedstocks for a potentially huge bioenergy market, contribute to overall development in the many agriculture-dependent developing countries, adopt more efficient and sustainable production methods and adapt to climate change.

The year 2050 might sound like a far off time but in reality it is just around the corner. Head on over and give the How to Feed the World 2050 report a read.

Below is a video of a modern farmer in Oakland, CA who is using simple technologies to grow foods in an area where people wouldn't think it possible to do so.