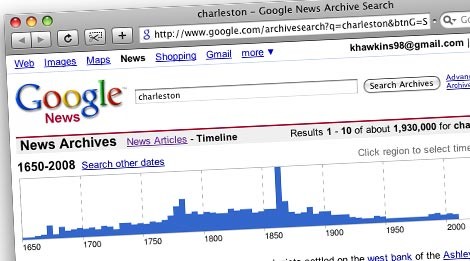 So, first of, I admit I'm way late to finding this feature, but I'm betting that many of you readers don't know about it.

Over at Google News you can get a graph of how popular a term has been over the years. If the feature only went back to the '90s it wouldn't be so interesting -- but it goes back to at least the 1600s. Crazy.

Things get a bit more interesting when you get creative.

For example, punch in "charleston hurricane" and you can get an indication of when we had big storm activity. Note the spike in 1989 for Hugo (hint, click on the graph and it zooms in). Slick.

Let's see what the timeline is like with Charleston and pirates. We search, zoom, and there we go. 1718.

Dozens of articles on Blackbeard and, this one: Their time would pass into history on a somber note with the mass execution of Stede Bonnet, the “gentleman pirate,” and his 29 crew members on December 10, 1718, from the gallows at what is present-day White Point Gardens. A marker stands to commemorate the...

It's a pretty neat tool.

If you want more technical details about it, here's a good write-up from December 2007.