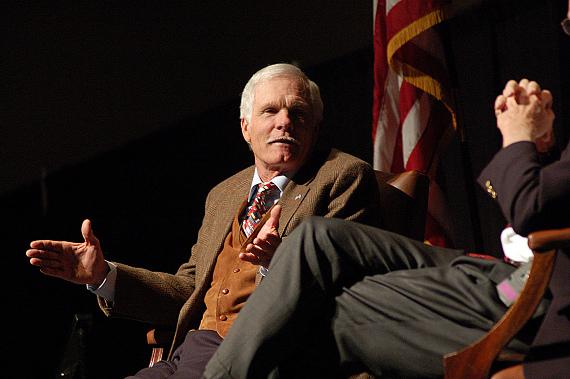 Join the South Carolina Aquarium and conservation-focused residents of South Carolina for the Aquarium's largest annual fund-raiser, the Oceans Gala.

The black-tie event, taking place April 27, recognizes individuals and organizations that have worked to protect the environment and our oceans. This year the South Carolina Aquarium will present its Environmental Stewardship Award to Robert "Ted" Turner III. The theme, Oceans, will celebrate the preservation and protection of the beauty of the underwater world. The evening will include cocktails, seated dinner, award presentation, performances and a 9 o'clock "after-affair" inside the Aquarium. The charitable evening will raise funds for The South Carolina Aquarium's diverse environmental, education, and conservation programs.

Ted Turner: Media mogul and philanthropist Ted Turner is best known as the founder of the cable news network CNN. In addition, he founded Turner Broadcasting System, Inc. and WTBS, which pioneered the superstation concept in cable television. As a philanthropist, he is well known for his $1 billion gift to create the United Nations Foundation, whose purpose is to support the goals and objectives of the United Nations in promoting a more peaceful, prosperous and just world. In 1990, he created the Turner Foundation, which focuses on philanthropic grants in the areas of environment and population, and the Captain Planet foundation, based on the environmental animated series "Captain Planet and the Planeteers", which educates and empowers children on how to make a positive impact in their communities. Turner's passion for the environment has earned him the distinction of being one of 12 Ocean Elders worldwide, acknowledged for their impact in conservation of the ocean and its wildlife.

"I am deeply honored to receive the 2013 Environmental Stewardship Award from the South Carolina Aquarium. South Carolina is a very special place for my family, and we strive to be good stewards of the land locally and globally," commented Turner "It's crucial that we work to save everything, from our oceans and wildlife to our rainforests and marshlands. A healthy planet is the most important gift we can give to our children and grandchildren."

The gala takes place April 27, from 6:30 p.m. to 11:30 p.m. Individual tickets are $300 per person; ten person table reservations are also available. Contact Tanya Fitzgerald at tfitzgerald@scaquarium.org or call (843) 579-8540 for more information about this event, including tickets and sponsorship opportunities.