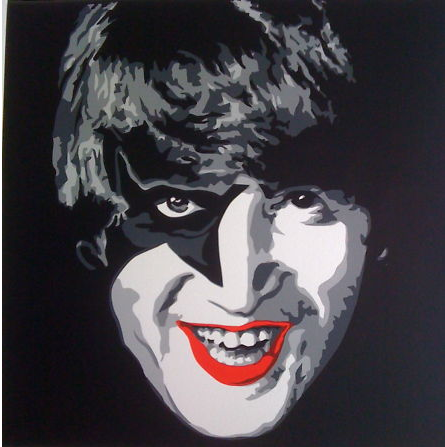 Chance Walls, frontman for the The Drag, recently auctioned off a set of extremely limited edition art prints from controversial and world renowned pop artist, Mr. Brainwash. All of the proceeds are going to buy new art supplies for the Myrtle Beach Boys & Girls Club.

I'm a huge fan of the documentary Exit Through The Gift Shop that propelled Mr. Brainwash (also known as MBW) into international fame practially overnight. For those that haven't yet seen the movie, it is the subject of much debate as to whether or not Mr. Brainwash is a real person or a character manifested by street artists Banksy and Charleston's own Shepard Fairey.

After I saw Chance post the eBay auction on his Facebook page, I had to know how he acquired the prints. Did he buy them? Did he use his music industry contacts to get in touch with MBW? IS BRAINWASH REAL?

"It was actually incredibly simple", said Walls. "I sent an email explaining that I was hoping they'd be interested in donating something to be auctioned off to help the local Boys & Girls Club. My daughter goes there and I really wanted to help them out in some way. I honestly had no expectations of hearing back from them. But if you don't at least swing, you aren't going to hit anything."

And he didn't. Not for a short while at least.

After a few exchanges from someone in the Brainwash camp named "Patrick", Chance realized that they were actually considering the idea. That's when he decided he should probably let the Boys & Girls Club people know what was going on and they shouldn't hang up on anyone that might call using names like "Mr. Brainwash" thinking it was a prank call.

When MBW asked where to ship the print, Chance thought it might be safer to have them delivered to him directly. "I imagined somebody not knowing the value of a MBW print just sticking it to the wall with thumbtacks."

The shipment did arrive and Walls had no idea what was in the box. He was totally blown away to see 4 very limited run prints of a piece that debuted just over a year ago at the ICONS REMIX show in New York called "Kiss the Beatles".

"My family and I were in total awe of these things sitting in my living room", Chance recalls. "I had never seen these particular pieces before."

After hyping the auction a little on his Facebook page, he knew the Brainwash name would bring interest on eBay. After several last minute bids, the prints finally sold for $810, nearly double what they went for when they were released last October.

"That's a lot of art supplies", Chance posted on his Facebook wall.

Walls sent links to his contact at Brainwash's company to let them know that his appreciation and intentions were genuine. He wanted them to know he wasn't keeping the prints for himself. But he hasn't received a response since they shipped the prints to him. Whether or not you believe Thierry Guerrta is the real Mr. Brainwash, there's no denying that Mr. Brainwash exists in some form or another and he has a charitable heart.

Chance obviously has a big heart as well. But most of it currently belongs to Atlanta. He plans on moving back to the ATL next week to continue working at the legendary Fox Brothers BBQ while doing shows with his band, The Lord is My Shotgun.