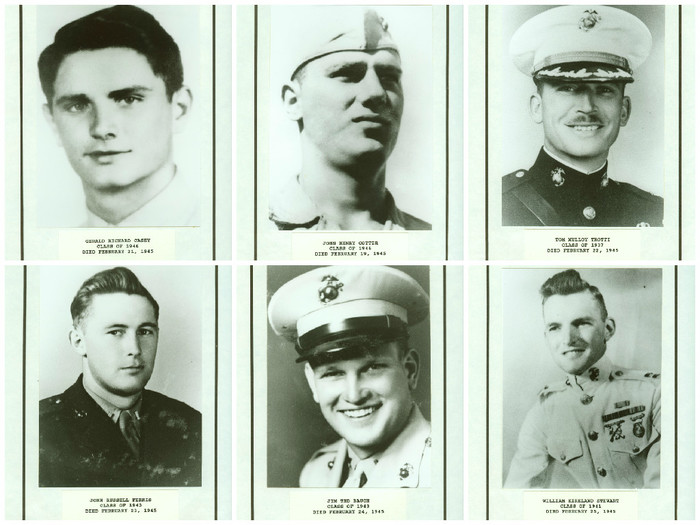 4:01 pm on Wednesday February 18, 2015 | Posted by The Citadel
The 70th Anniversary of the Battle of Iwo Jima: Remembering The Citadel’s World War II Marines

The Citadel has had a long and distinguished line of Citadel Marines dating back to before the first World War. On the eve of the United States’ entry into World War I, every member of the Class of 1917 entered military service. Thirteen of them were commissioned in the Marine Corps, a fact that was the subject of an investigation by a Congressional committee. That legacy continues strong to this day.

Seventy years ago, on Feb. 19, 1945, Operation Detachment, better known as the Battle of Iwo Jima, began. It would become one of the costliest battles waged by the United States during World War II in the Pacific Theater. Even before the landings, doubts about the necessity of the operation surfaced.  Those doubts were overshadowed by rivalries and intra-service agendas between the Army, Navy, and Army Air Forces. The Marine Corps, which would pay the heaviest price for the landings, was cut out of the decision-making altogether.1

On the fifth day of the battle, war correspondent Joe Rosenthal took a photo of the second flag raising on the summit of Mount Suribachi. That photo, later cloaked in its own controversy, immortalized the battle of Iwo Jima and is the iconic image of the battle, the war in the Pacific and the United States Marine Corps.

As the battle to secure the island raged, a crippled B-29 Superfortress that was low on fuel made an emergency landing on Motoyama Airfield No. 1 on March 4, 1945. This and other subsequent emergency landings were heralded in the war press as proof that the enormous cost of the battle was justified.

By the end of the battle, the Marines suffered approximately 26,000 casualties with almost 7,000 deaths, while the Japanese lost more than 19,000 service members with only 216 captured. It was one of the costliest battles of the war and the only battle where Marine casualties exceeded the Japanese.  Nearly one-third of Marine deaths in World War II were a result of the Battle of Iwo Jima.

When the ramps went down on the black volcanic sands of the beaches of Iwo Jima, The Citadel was well represented. Pfc. John H. Cotter and Pfc. Gerald R. Casey were both assigned to Company C, 1st Battalion, 23rd Marine Regiment, 4th Marine Division. Their close association goes further back than this, however. Cotter and Casey were childhood friends from Augusta, Georgia. Both attended Sacred Heart Church and school, and both matriculated in 1942 with The Citadel’s Class of 1946. Their cadet careers, however, were cut short when they were both inducted into the Marine Corps and shortly thereafter assigned to the 4th Marine Division.

Prior to the training for the Iwo Jima landing, the 4th Division established a football team which included some former collegiate stars and a few ex-professionals. The team was open to all. Cotter and Casey both made the team, which went on to become the Central Pacific Champions. They even shared consecutive Marine Corps serial numbers—Casey: 816135, Cotter: 816136. Cotter was killed on D-Day, Feb. 19, 1945; Casey died two days later on Feb. 21, 1945. Both were buried in the 4th Division cemetery on Iwo Jima and were later brought home to be reinterred in family cemeteries in Augusta.

On the morning of Feb. 22, the Marines of the 26th regiment were ordered to relieve the 27th regiment on the front lines. Broken terrain, heavy rain, poor visibility and intense enemy fire hampered the operation. Hastily issued orders and ill-defined unit boundaries made it all the more difficult. Trotti’s battalion was overextended, and at about 0940, Trotti and his operations officer were killed as they worked to adjust their lines. He was buried in the 5th Division cemetery on Iwo Jima before his family had his remains reinterred in the Chesterfield cemetery in Chesterfield, South Carolina.

Second Lt. John Russell Ferris, Class of 1943, was a platoon leader in E Company, 2nd Battalion, 21st Marine Regiment, 3rd Marine Division. After his freshman year at The Citadel, Ferris transferred to another college and by 1943 enlisted in the Marine Reserve. He attended Officer Candidate School, and after commissioning and infantry training at Camp Lejeune, Ferris was assigned to the 21st Marine Regiment in July 1944. He landed on Yellow Beach with his company early on the afternoon of Feb. 21, 1945. He was killed in action on Feb. 24. He is buried in Arlington National Cemetery.

Second Lt. James Theodore Baugh, Class of 1943, was a platoon leader in the 24th Marines. After his freshman year at The Citadel, Baugh transferred to another college. In March of 1942 he enlisted in the Marine Corps Reserve and attended Officer Candidate School. He was commissioned and attended the infantry training school at Camp Lejeune in October 1944. Baugh was killed in the fighting to secure the Motoyama plateau and Airfield No. 2 on Feb. 24, 1945.

Maj. William Kirkland Stewart, Class of 1941, was a native of Florence, South Carolina, and member of the Regimental Band at The Citadel. First Sgt. of Band Company and member of the Junior Sword Drill his junior year, Stewart majored in business administration. He was the secretary-treasurer of the Class of 1941 and graduated second in his class. He was commissioned a second lieutenant of Marines.

At 0930 on Feb. 26, Stewart, commanding A Company, 1st Battalion, 24th Marines, prepared for an attack against the formidable Japanese defenses to their front. Following a strong artillery and mortar concentration, the company began their assault and pushed forward. They had only gone a short distance before Stewart was struck by small arms fire. He was quickly evacuated to the beach and then to a hospital ship, but died of his wounds later that afternoon. He was buried at sea the next day.  His name is inscribed on the tablet in the Courts of the Missing, Honolulu Memorial, National Memorial Cemetery of the Pacific, Honolulu, Hawaii.

Of our World War II Citadel Marines, and certainly those who paid the supreme sacrifice on Iwo Jima, Adm. Nimitz said it best, “By their victory, the 3rd, 4th and 5th Marine Divisions and other units of the Fifth Amphibious Corps have made an accounting to their country which only history will be able to value fully. Among the Americans serving on Iwo Jima Island, uncommon valor was a common virtue.”  Semper Fidelis Citadel Marines!

The author of this piece is Maj. Steven Smith, a TAC Officer for The Citadel's Regimental Band as well as The Citadel Alumni Association Historian.