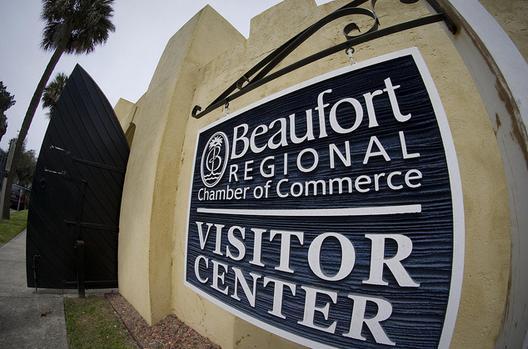 Blakely Williams, a four-year veteran of the Beaufort Regional Chamber of Commerce and its interim president since April, became the full-time president and CEO of the local business organization today following approval by the Board of Directors.

Williams, formerly director of member services for the Chamber, assumes her new role immediately. She succeeds Carlotta Ungaro, who left the Chamber in April to take a similar post in the Research Triangle area of North Carolina.

“We are thrilled to have Blakely Williams continue her leadership role with the Beaufort Regional Chamber of Commerce. She brings unmatched experience with our local business community, boundless energy and enthusiasm, and has a great feel for where we need to take this Chamber in coming years,” said Jon Rembold, chairman of the search committee and incoming chairman of the Chamber Board of Directors.

Williams recently organized and led the annual meeting and Civitas Awards recognizing exceptional business and community leaders, and she and her team helped increase new memberships and boost retention rates of existing members.

“I am honored and humbled to be selected,” Williams said. “With the Joint Strike Fighters coming to the Air Station and the $70 million in base construction that is starting soon, plus the improving local economy, the Chamber is poised to make great strides. It’s an exciting time and I am proud to step into this new leadership role.”

Williams and her team, with the Board’s leadership, will work throughout 2011-12 to transition apart from the Visitor & Convention Bureau. The change will better allow the Chamber to focus on its core functions, which center on building a better business climate and actively supporting member businesses.

“With her background in member services for our Chamber, Blakely was the ideal candidate. She is the right person in the right place at the right time to lead us into the future,” said Jimmy Boozer, outgoing chairman of the Chamber Board who participated in the search committee.

Williams graduated Presbyterian College and participates locally on the YMCA Board of Directors, the Junior Service League of Beaufort and the Rotary Club of the Lowcountry. In addition to her Chamber experience, she also worked in human resources with the Waffle House company where she coordinated personnel matters for 12 restaurants and 240 employees.

The Beaufort Regional Chamber of Commerce supports more than 700 active members. Their offices are in the historic Carnegie Building at the corner of Carteret and Craven streets in downtown Beaufort.

There were 19 applicants for the position and the search committee interviewed three.

The Island Packet also has a full report on the news; you can check it out here.

We'll update with an official release when we see it.

First reporting April 25: In her first "official" duty as interim president Blakely Williams penned a column for The Island Packet that discussed the chamber's goals from here on out.

You can check that out here.