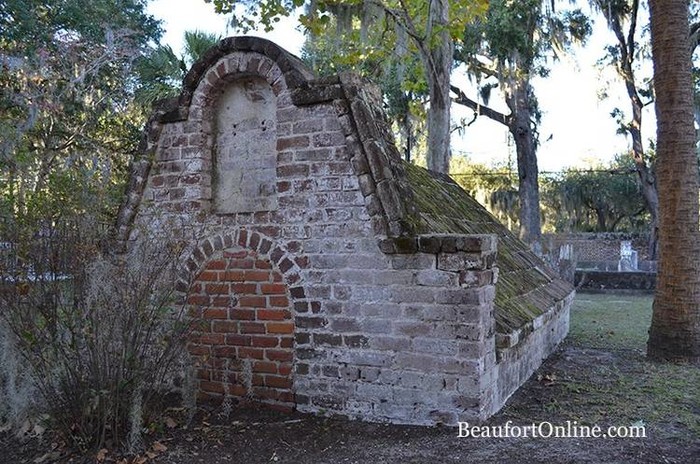 Many residents of Beaufort feared the possibility of being buried alive. Apparently, during a bad sickness, a patient’s breathing could become so shallow that they appeared to have passed away. Knowing this, Dr. Perry built this above-ground tomb in St. Helena’s graveyard and instructed his relatives, “If I pass away, bury me with a jug of wine, a loaf of bread and a pickax. Should I wake up and find myself inside, I shall drink the wine, eat the bread and dig myself out.” Dr. Perry did in fact die during an outbreak of yellow fever, so he was placed in this tomb, and the entrance was sealed in wood in case he woke up. After the family finally gave up hope that he would “resurrect,” they bricked up the exit. This is why you see newer bricks on this side of the tomb.

I have not discovered any documentation that this story is entirely accurate. It may have to go down as “word-of-mouth-history,” and there are no names or dates on the tomb. However, it is listed as the tomb of Dr. Perry in an information booklet called “Old Churchyard”  from St. Helena’s Episcopal Church. The booklet confirms that Dr. Perry is interred here, as his name corresponds with the tomb’s location on the map. Curiously, there is no first name listed- it simply says, “Perry, ___Dr, p.6, E-12.” I only know him as Dr. Perry, and I do not know the date of death- another Beaufort mystery.

Head to the source at beaufortonline.com