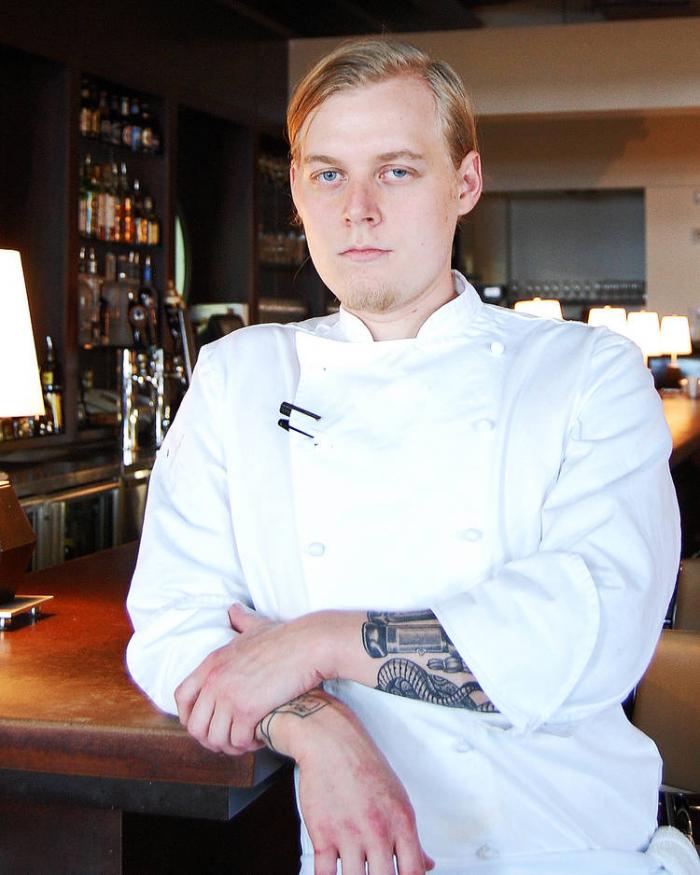 Executive Chef Brian Waters began his career with Plums, Inc. more than 10 years ago. Starting off as a pantry cook – preparing cold foods and salads – Waters quickly realized that not only did he enjoy cooking, but he was good at it.

Fast forward to 2011, where Waters has been serving as executive chef at Saltus River Grill for the past year.

When restaurant owner Lantz Price developed the concept for Saltus, Brian immediately knew that he wanted to work there. His tenacity paid off – in 2005 he became sous chef to then Executive Chef Jim Spratling. Honing his skills over the years, he eventually worked his way up to Chef du Cuisine in 2009, and finally to his position today as executive chef.

Though Waters’ entire culinary education has been with Plums Inc., his interest in food began much earlier. “I remember being fascinated while watching my grandmother cook when I was a child,” Waters reminisced. “Picking corn out of the garden, helping her shuck, and then going inside and making into creamed corn … watching her break down countless fish.”

As he has matured as a chef over the past years, Waters has discovered a passion for sourcing food locally. “Better product makes better food,” he states. Working with local farmers and fish mongers ensures that the restaurant obtains the freshest food. Referring to his updates from his local food sources, he exclaims, “It’s really exciting. It’s like Christmas every week!”

In addition to focusing the menu on locally sourced foods, Waters has evolved the restaurant in other ways. He constantly researches what other chefs are doing – what new techniques and equipment they’re using – and looks to incorporate these into his kitchen. Thus, he’s recently added an immersion circulator, a tool that creates even liquid cooking temperature, to the tools in their kitchen, and he’s making use of transglutaminase – an enzyme which binds food proteins together – that enables him to ensure even cooking of meats and adds to the aesthetics of his food presentation.

Watching Waters in the kitchen is fascinating. While many find the meticulous details and repetition of tasks to be tedious, he seems to find comfort in it. His patience is exceptional, and he finds it to be one of his greatest strengths. He finds beauty in even the most mundane tasks, and enjoys the challenge of preparing the same dish repeatedly and striving to perfect the technique to a greater extent each time.

That said, due to his determination to use local foods, the menu at Saltus does change frequently. This contributes to his desire for the restaurant, to have a “menu geared toward the dining experience – with both food and service,” he explains. “I want everybody to feel like they’ve had the best dining experience in Beaufort,” he expresses. To aid in reaching his goal, he works with the serving staff to encourage diners to do just that.

Waters expresses pride in his staff, stating that they’re a “talented crew,” and that he tries to get as much input from them as they can. “If they have even a little bit of ownership, they’ll appreciate it more,” he explains.

When not at the restaurant, Waters enjoys cooking breakfast for his wife, a photographer, and two children – Emryck, 6 and Clementine, 3 1/2. All share a love of food, and his children are reportedly following in his footsteps.

Saltus River Grill is located at 802 Bay Street in downtown Beaufort, and is open nightly for dinner. For reservations, visit their website or call (843) 379-3474.﻿﻿