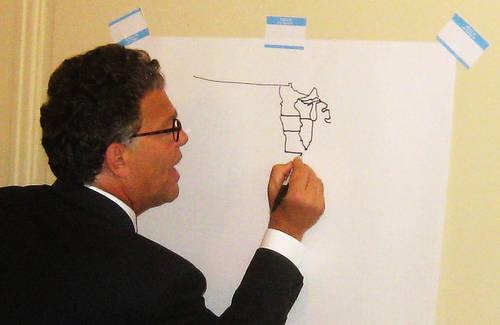 11:03 am on Tuesday December 21, 2010 | Posted by Ken Hawkins
South Carolina picks up a 7th Congressional district. What does that mean for Joe Wilson?

Census data released today show that South Carolina's population has increased to the extent that it will receive a seventh congressional district.

South Carolina's population increased by 15.3 percent to 4.6 million residents in the past 10 years, according to Census numbers.

Here's an Associated Press report on the South Carolina numbers, and MSNBC has a real nice interactive map showing the population changes. You can check that out here.

So what does all of this mean for Beaufort County and our District 2 representative Joe Wilson?

Well, the next step is that the majority party in the state legislature (the Republicans in South Carolina) get to redraw the district lines, and with the Palmetto State's population increases showing up along the coast, specifically York, Horry, Beaufort and Charleston counties, it looks like the new district will front the Atlantic Ocean.

While this all is purely speculation, The Cook Political Report, an online blog, has offered two possibilities of what a new district and the redistricting would look like. Both look to shore up Joe Wilson's district while also understanding the need to create another majority African-American district.

The interesting thing is that both scenarios show Beaufort and Jasper counties being split up, which is interesting considering their issues are so closely aligned. Both counties currently are represented by Wilson.

That press release is copied below.

“After listening to the announcement this morning, South Carolina will receive an additional seat in Congress.

“After 80 years, it appears the state will regain its seventh Member. I am looking forward to having this Congressional seat added to our delegation. The people of South Carolina will now be able to have another advocate on their behalf in Washington.

“Growing our representation on Capitol Hill is a key factor in achieving goals for the people of the Palmetto state. It now means our state has a seventh voice fighting for causes that matter most to the residents of South Carolina with a new district on the fast-growing coast.

“Moving forward, the General Assembly will have the task of re-districting the current Congressional map. I am confident in its ability and would like to offer any assistance I can,” said Congressman Joe Wilson.