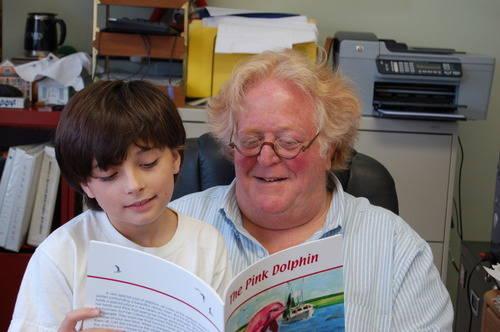 9:11 am on Wednesday November 17, 2010 | Posted by Lowcountry Child
The Little Dolphin That Could

After being elected mayor in 2008, Beaufort Mayor Billy Keyserling began handing out copies of “The Little Engine that Could” to “naysayers” in the community as a way to encourage them to do what is necessary to build a better Beaufort. But he says the children’s classic wasn’t truly expressing what he wanted to say.

“I realized my message was more about people working together rather than the little engine’s determination,” Keyserling says. “Accordingly, I decided to write a book, in a language and manner people could understand. In other words, my own version of ‘Little Engine.’”

Who better to co-author a children’s book with than an engaging, talented child? That’s just the sort of co-author Keyserling found in 10-year-old Thomas McDermott-Post, who collaborated with the mayor to write “The Pink Dolphin,” newly published and available to the public.

The themes of collaboration and community shine through this tale of a special dolphin and what she teaches those around her about cooperation. It’s a story “about people learning that we are all better off if we work together,” Keyserling says.

The story surrounds a pod of rainbow-colored dolphins that inhabit the waters of a small, historic town. The pink dolphin develops a special relationship with local shrimpers, though her fellow dolphins warn her that humans are trouble and it is best to stick with your own kind. But when a dangerous storm threatens the town, the pink dolphin must learn how to get both the dolphins and shrimpers to work together to save their community.

“The pink dolphin is a true leader in that she stands up for what is right,” Keyserling says.

Keyserling has known Thomas since the boy was about 4 years old. When he was 8, Thomas says, “Mayor Billy talked to me about what it’s like to be mayor, and how it is sometimes difficult to get people to work together in a different way than they used to.”

Keyserling shared with Thomas that he was trying to find a way to inspire those people and asked the boy if he had any ideas. “I went home and thought about it,” Thomas says. “And all of a sudden the whole story came into my head.”

He had his mom type up the story of the dolphins and send it to Keyserling to “cheer him up.” When the two discussed what color the dolphin heroine should be, Keyserling suggested pink but Thomas wasn’t so sure.

“Thomas told me that dolphins are not pink,” Keyserling says. But the mayor reminded the boy that he wrote a story where dolphins speak to each other in English and therefore the dolphin could be any color they wanted. The two friends laughed and agreed pink was perfect.

“The Pink Dolphin” was written as a children’s book with an adult message so it would relate to readers of all ages, Keyserling says. The enchanting tale is brought to life through illustrations of the Lowcountry created by watercolorist Bull Dula, who spent most of his career in New York City but retired to Beaufort with his wife, Marie.

The message of collaboration is pertinent to every facet of our lives, but Keyserling says the story certainly relates to all the blaming and partisan wrangling going on in politics today.

“Many (people) resist change. It takes a few leaders (like the pink dolphin) to stand out front and show that change can work,” he says.

Thomas moved to Asheville, NC, with his mother, Kim McDermott, in June to attend Rainbow Mountain Children’s School. But he says he enjoyed returning to Beaufort recently for a book signing at ARTworks, where he got to talk to people about why working together is so important.

“We all have different ideas and different ways of doing things,” Thomas says. “That actually helps.”

Copies of “The Pink Dolphin” are available on the book's website or on Amazon.