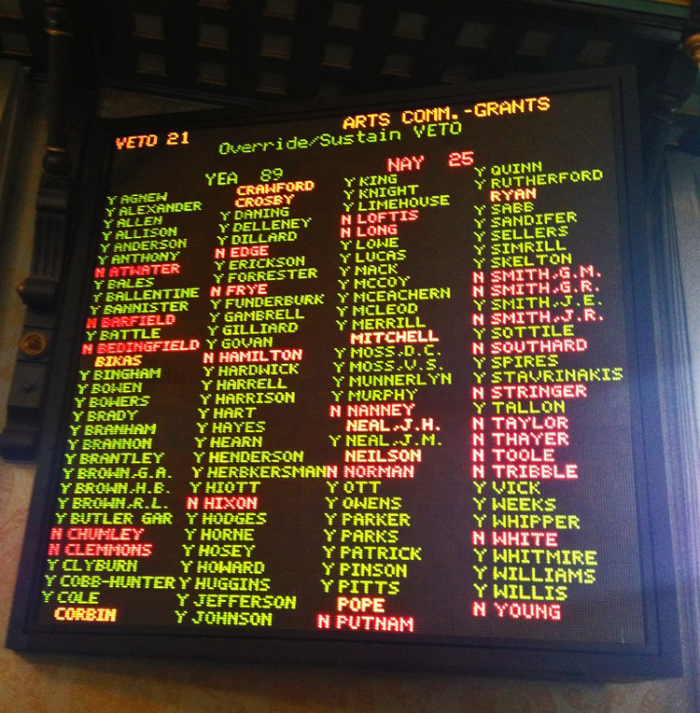 Earlier this month Gov. Nikki Haley vetoed a plethora of state budget items — among those were political hot topics, like funding for rape crisis centers.

Outcry was doubled against the governor as the vetoes temporarily eliminated some state funding, thanks to the Statehouse being tardy in getting the budget to the governor and creating a gap between fiscal year funding.

The grassroots protest over the vetoes was enough to draw the House and Senate back early.

On Tuesday the House voted to override 81 of the governors 111 vetoes (73%) — still, those veto overrides need to be concurred by the Senate to make their way to being actual funding.

The Senate is expected to vote on the vetoes today.

If the Senate concurs with the House — the expected move for the vast majority of the vetoes — funding will come back for the rape crisis centers ($453,680 for 15 centers), the South Carolina Arts Commission ($3.9 million), and the South Carolina Sea Grant Consortium ($6 million).

Not surviving in the voting was $200,000 to preserve Mitchelville land that was believed to be the first planned community for ex slaves.

Update July 19: The S.C. Senate voted with the House to override most all of the same bills, only upholding three of Haley's vetoes.

Those vetoes supported are added onto the House's tally — that's a total of 33 vetoes sustained out of Haley's 111.