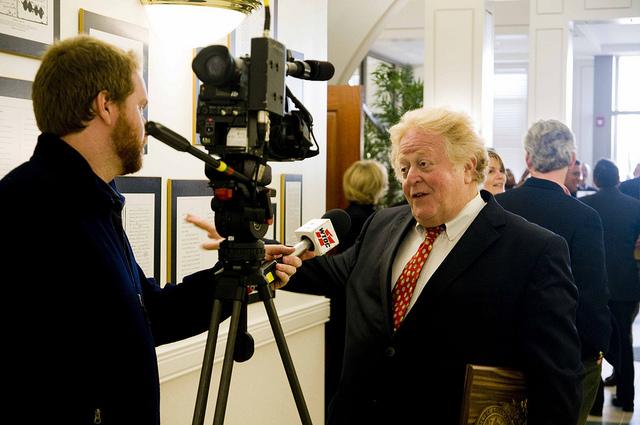 4:26 am on Thursday August 16, 2012 | Posted by Ken Hawkins
Mayor Keyserling running unopposed, only one challenger for Beaufort City Council seats

TheDigitel
Keyserling chats on camera during the grand opening of the new Beaufort City Hall in December 2010.

Announced in June, the window to file to run to be Beaufort's mayor or for one of two spots on city council has closed, and the field has only one newcomer.

Up for re-election Mayor Billy Keyserling, and council members Mike McFee and George O'Kelley Jr — all three have said they will run, however no one filed to run against Keyserling and only one local is competing for the council seats.

Tossing his hat in the ring is Pete Palmer, a former CIA employee.

On Tuesday he posted to his personal Facebook page that:

What craziness - just filed to run for City Council.

What on earth makes me think that my presence will or might make a difference? Is my love of this town greater than the incumbents? Perhaps a new face, with different questions and concerns....
Perhaps a deeper need to protect our very diverse neighborhoods....
Perhaps a willingness to listen to the stakeholder-citizens before voting on things that will impact on their lives....

The idea is to let sun shine in on the processes!!!

In a report for The Island Packet, Erin Moody offers a bit more on the background of Palmer and the incumbents.

Although Keyserling is running unopposed, he doesn't appear to be letting it slow him down, writing: "It appears no one else filed to become Mayor, I will be running against myself, campaigning as if I had opposition with events, door knocking and mailings. By doing so I am hoping to continue to carry the message of Beaufort becoming even more environmentally, culturally and fiscally sustainable."

The mayor and council are elected for four year terms, with the other three council seats offset by two year, being up for election in 2014. All seats are at-large, and voters across the city will vote for the council seats — that means out of Palmer, McFee, and O'Kelley, the top two will take the council seats.

The election is November 6.