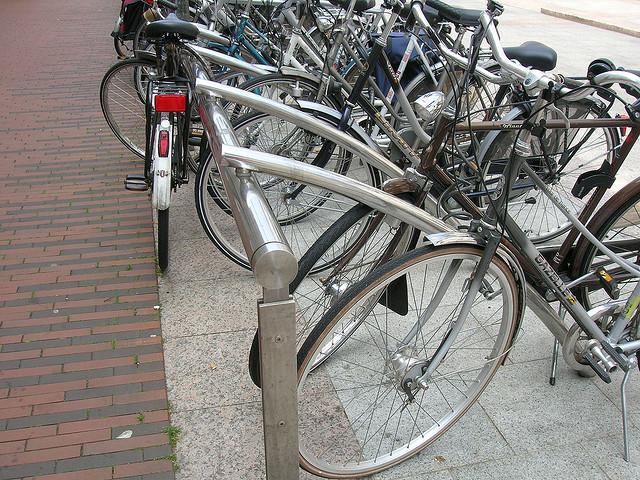 The city is taking on painting markings on some roads to remind people that they need to share their lane with cyclists.

But for Beaufort, this is very much a start, and echoes a string of recent bike-related news in Beaufort.

Earlier this month word came that Beaufort police would increase their bike patrols, and in April the city announced they would be installing bike racks around downtown.

The white markings of a bike and two arrows will create pathways through Beaufort that will connect to bike lanes on Lady’s Island and to future improvements along Boundary Street and US 21, said Jon Verity, chairman of the Beaufort Redevelopment Commission.

Shared lane pavement markings are bicycle symbols carefully placed on the pavement to guide bicyclists to the best place to ride on the road, avoid car doors and remind drivers to share the road with cyclists.

Unlike bicycle lanes, sharrows don’t designate a particular part of the street for the exclusive use of bicyclists. Instead, they guide bicyclists to the best place to ride and help remind motorists to share the lane with bicyclists.

What do sharrows mean for motorists and bicyclists?

Motorists:
-﻿ Expect to see bicyclists on the street
-﻿ Remember to give bicyclists three feet of space when passing
-﻿ Follow the rules of the road as if there were no sharrows.

Bicyclists
-﻿ Use the sharrow to guide where you ride within the lane
- Remember not to ride too close to parked cars – doors may open unexpectedly
-﻿ Follow the rules of the road as if there were no sharrows.

The idea of ‘complete streets’ is core to Beaufort’s planning for its fourth century, and key to the historic city’s economic rebirth, Beaufort Mayor Billy Keyserling said.

“Our goal is to make it comfortable and safe for people to move throughout Beaufort, whether they are on foot, in a car, on a bike, in a wheelchair, on a bus or riding a horse-drawn carriage,” Keyserling said. “Roads need to be more than just thoroughfares for cars and trucks.”

Here are some more tidbits from a press release:

The Beaufort Redevelopment Commission and the City’s Office of Civic Investment are working with residents, business leaders and developers to prepare recommendations to the Beaufort City Council on how to position Beaufort for the next 50 years.

“Infrastructure is key to Beaufort’s future success, and to our ability to attract new businesses and residents,” Verity said. “Using existing roadways with improvements to sidewalks, intersections, crosswalks, bike lane markings and other approaches, we hope to create an effective pathway in and about Beaufort.”

For a community that’s been recognized for its arts, fishing and waterway access, finding new and improved ways to get about is a priority, said Demetri Baches of Beaufort’s Office of Civic Investment.

“For communities to be walkable, thoroughfares must be designed with pedestrian comfort and safety as critical goals,” he said. “Roads have to serve multiple other uses along with keeping vehicles moving smoothly. They have to accommodate emergency vehicles, on-street parking, utilities, storm water, landscaping, street lamps and bicyclists, and in Beaufort, we have to be very aware and sensitive to historic areas.”