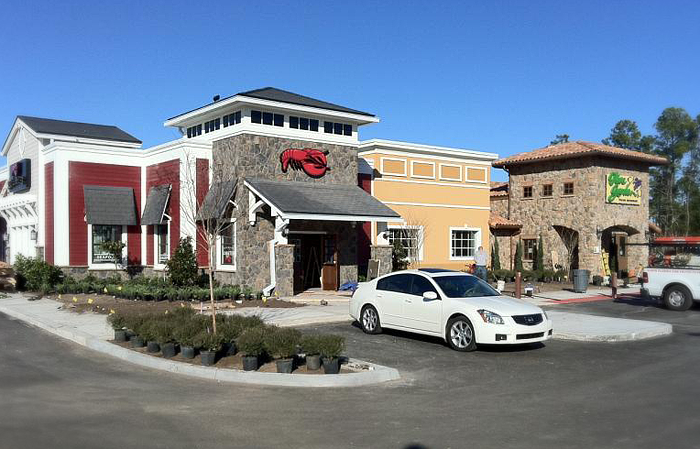 Update January 31: While the planning approval is still underway for the Olive Garden-Red Lobster in Beaufort, similar units are being built in other parts of the country.

Namely one in Palm Coast, Florida.

The picture above shows the design of this one (which we can expect to be a bit different in Beaufort) and a brief in the Orlando Sentinel reveals how the cross-kitchen but separate dining model is set up; read that here.

First reporting November 18, 2010: Owner of many Beaufort buildings and developments, 303 Associates has confirmed that they plan to bring an Olive Garden and a Red Lobster to their Town Center development on Boundary Street.

A press release touts the prospective economic impact of 60 direct full time jobs and 30 secondary support jobs, the group is also forecasting a development cost of $4.6 million for a LEED certified building and supporting elements and generation of some $450,000 in tax and revenue fees.

Expect more on this one as the group seeks an OK from the City of Beaufort on development plans. The present target open date is summer 2011.

The pair of press releases are below for brave souls:

Beaufort, SC – In response to numerous inquiries, Beaufort’s 303 Associates today confirmed that a contract has been signed with Darden Restaurants, inc., owners of the popular Olive Garden, Red Lobster, Longhorn Steakhouse and three other national restaurant operations.  The Beaufort contract calls for the Italian themed Olive Garden and a Red Lobster to be built in the Town Center complex on Boundary Street.  Located across the road from the County Government Center and in front of the new Hilton Gardens Inn, the restaurants could be open by early Summer 2011.

Word of the possibilities of both Olive Garden and Red Lobster coming to Beaufort have been fueled by visits of officials from Darden to Beaufort for meetings with the Lowcountry Economic Network and the City of Beaufort in recent months.  Darden is headquartered in Orlando.

The jobs impact of the investment in Beaufort would be, “significant,” according to media spokesman for 303 Associates, Glen McCaskey.  “The community will be looking at more than 60 new full time jobs with benefits,” said McCaskey, “plus another 30 or so equivalent jobs, all within easy walking or commuting distance from the City’s core.”

The construction cost of the two restaurants will also be substantial, according to McCaskey, estimating it to be around $4.6 million.  The Darden general contractor can be expected to employ numerous local subcontractors once plans receive final city approval.

“More important than the significant construction work coming at a time when contractors are closing down,” commented McCaskey, “is the ongoing fiscal impact of this investment for City of Beaufort taxpayers.  We expect the two restaurants to spin off annual sales and hospitality taxes, plus other taxes and fees, well above $450,000 annually.”  McCaskey also pointed out that Olive Garden and Red Lobster would be built and commence operations at a time when city revenues are predicted to suffer a major decline due to the scheduled real estate reassessment in a period of declining valuation.  “Revenues generated from this project will help off-set City revenue declines and even help pay for the new City Municipal Complex,” observed McCaskey.

The next step for Olive Garden and Red Lobster is to go before the new Metropolitan Planning Commission in December to formalize a minor site variation request.  Other details have been worked out previously between Darden and city representatives.  Subsequently, City Council will be asked to approve the project.

Darden Restaurants, inc. is the world’s largest full-service restaurant company, owning more than 1,825 restaurants.  Its most popular operation is Olive Garden, which also has been the most requested restaurant operation from local citizenry, according to the Lowcountry Economic Network.  Courtney Worrell, of 303 Associates reports the same experience.  “The most common inquiries we receive for new facilities have involved Olive Garden”, says Worrell.  “So we are particularly happy to be working with Darden Restaurants to bring them and Red Lobster to Beaufort.”

Beaufort Town Center began development in 2000 across from the County Government Center on Boundary Street.  A largely blighted area of the city at the time, its decline has been reversed by an entirely private sector redevelopment. 303 Associates has spearheaded the initiative and sought no government subsidies or incentives in the process

In the past ten years, more than $40 million of private funds have been invested in the Beaufort Town Center area.  It was through this initiative that Outback and Moe’s restaurants were attracted to Beaufort, plus the Hilton Garden Inn, and that the Beaufort Town Center Shopping Plaza was significantly upgraded and two new public parks created.  The redevelopment has built two office complexes, including the county’s first mixed use LEED Gold certified building.  Numerous isolated “donut hole” lots have been annexed into the city, and the quality of the adjacent marsh has been restored by the replacement of septic fields with public sewer and removal of more than 20-tons of trash from the marsh itself.  In addition, a seawall has been built and a master storm water system and underground utilities system funded and built, along with a parallel road network.

Commenting on the ten-year history of the venture, Dick Stewart, principle of 303 Associates, said, “We have always had a good relationship with the City and our neighbors.  We’re delighted to play a part in bringing family friendly, high quality restaurants and jobs to Beaufort.”