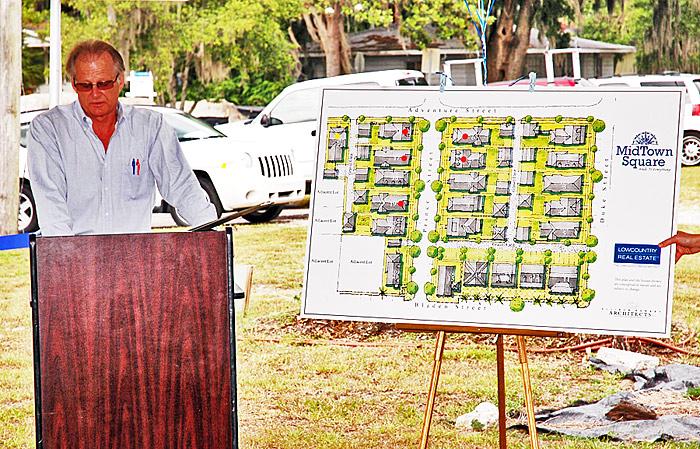 7:47 am on Sunday May 15, 2011 | Posted by Ken Hawkins
With groundbreaking of 'MidTown Square,' Beaufort's form-based code efforts get a push

Construction on the MidTown Square was the first plan approved under the county's new form-based code. That worries some preservationists, according to a report in The Island Packet, who are concerned that because a greater emphasis is placed not on what the new buildings will be used for but rather what they look like, and that it will allow developers to "bypass city review boards."

The homes are designed to be close together on smaller lots with starting prices in the $260,000 range.

Check out the Packet's coverage here. WSAV was on site for groundbreaking and has a video report that you can watch here.

The city has also issued a press release on the news; you can read that below and learn loads more on the development's website.

MidTown Square, a new housing development on a block and a half of long-neglected land in Beaufort’s Northwest Quadrant, celebrated its ribbon-cutting Thursday to the applause of city leaders, neighbors, real estate agents, and developers.

The two-plus acres is slated for up to 16 homes and six “live-work units” developed by Steven Tully and John Trask III. Beaufort city leaders already have in place plans for $1.3 million in streetscape improvements in the area of Bladen, Prince, Duke, and Adventure streets. The improvements are being paid for through two federal Community Development Block Grants.

“The MidTown Square project will make a huge difference in the look, feel, and texture of a big part of interior Beaufort,” Verity said.

“This type of infill is what we are seeking as we move Beaufort into its fourth century – encouraging the filling in of open and vacant spaces in the City to create new homes and new jobs. It’s happening because private investors are responding to the investment made by the City to improve Beaufort,” he said.

The project is the first approved under the city's new Bladen Street Redevelopment District zoning code -- a form-based code that emphasizes how a structure fits into a neighborhood rather than how it will be used. The form-based code work, led by the Redevelopment Commission and the City’s Office of Civic Investment, is being done in conjunction with Port Royal and Beaufort County.

Three MidTown Square homes already are under construction. Custom homes in Midtown Square will start around $260,000 and pre-designed homes will cost less, said builder Allen Patterson. By design, homes will be built close to the road with parking in the rear to encourage interaction with neighbors walking past.

Beaufort's entire Office of Civic Investment along with its Planning and Public Works departments came together to keep this project moving forward, Tully said. “The level of communication and cooperation, and the desire by the City to help make things happen in this area, really impressed us,” he said.

“We have been talking about public-private partnerships and we have been working to create a more walkable, liveable, and financially sustainable Beaufort where residents can enjoy all that Beaufort offers. This project is exactly what we are talking about,” Beaufort Mayor Billy Keyserling said.

“In the past, the City has used funds to improve streetscapes, drainage, and sidewalks and then adjacent property owners put signs on their properties asking higher prices because of the public investment. This time, the public investment is being used by land owners as a way to improve their property rather than seeking a windfall. It is a win-win for all and sets a precedent for the future,” Keyserling said.

The ribbon-cutting came a year after intense clean-up help by the City of Beaufort and neighborhood associations removed some 400 tons of debris from the area. That work, coupled with “preservation-minded” Keyserling and the efforts of Historic Beaufort Foundation, helped editors of This Old House magazine name Beaufort’s Northwest Quadrant one of the nation’s 51 ‘Best Old House Neighborhoods’ in 2010.

The area, once a thriving black middle-class neighborhood just blocks off the Beaufort River, fell into disrepair in the 1970s. It became one of Beaufort’s blighted and neglected areas until renovations started in earnest in the mid-1990s.

“This is a great opportunity to live in one of the prettiest waterfront cities in the South,” the magazine wrote. “The Quadrant’s downtown location puts it within walking distance of restaurants and shops.”

Tully agreed that the property’s location is key. “Even before we started our marketing, we had reservations for two homes and a contract for a custom home in MidTown Square,” he said. “There’s a great deal of interest in people who want to live in the heart of a small town, where there’s so much to do without getting in a car to drive somewhere.”

Tully and Trask of Community Development Corp. of Beaufort purchased the land in 2006. The property features the 1912 offices of Coastal Contractors and that structure likely will be rehabilitated, Trask said.