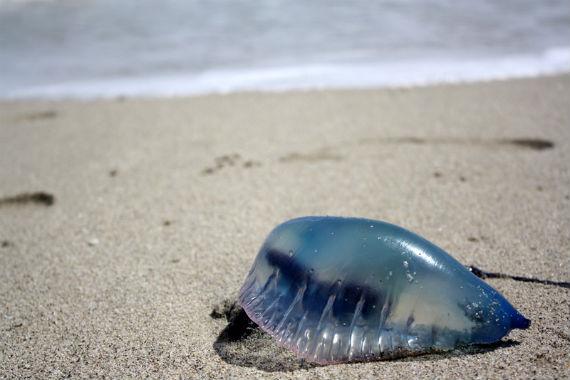 Update July 5: While the Portuguese man-of-war ﻿threat seems to have dwindled, their not-so-kin jellyfish brothers struck hard this weekend.

WSAV's Crystal Bruce reports that down at Savannah's Tybee Beach some 894 people were stung.

Update June 14: A followup update with some more local information.

15 were counted off Hilton Head beaches and six on Tybee Island near Savannah.

Along with that Tybee number, WTOC has a decent video report on what's up; you can watch it here.

In short, they're out there, so keep your eyes open and be sure to brush up on the safety tips below.

First reporting June 11: On Wednesday, a Portuguese man-of-war was spotted at Folly Beach near Charleston, and it wasn't the only one — several others have been spotted on area beaches over the past several days.

And, as you can imagine, this isn't necessarily the best news. Portuguese man-of-wars are no laughing matter, and their stings are extremely painful.

I haven't heard of any down near Hunting Island yet, but you ought to be on the lookout as they're probably also nearby Beaufort beaches thanks to the Gulf Stream pushing them along the East Coast.

What should you know about these menaces? The Post and Courier gave the following info in their report:

If you come across a man-of-war on the beach, it's recommended that you bury it without touching it in order to prevent it from stinging someone else.

The state Department of Natural Resources also has a great resource on jellyfish, along with a list of local varieties. And if you've been stung, or know someone who has, here are some tips on how to treat a sting.