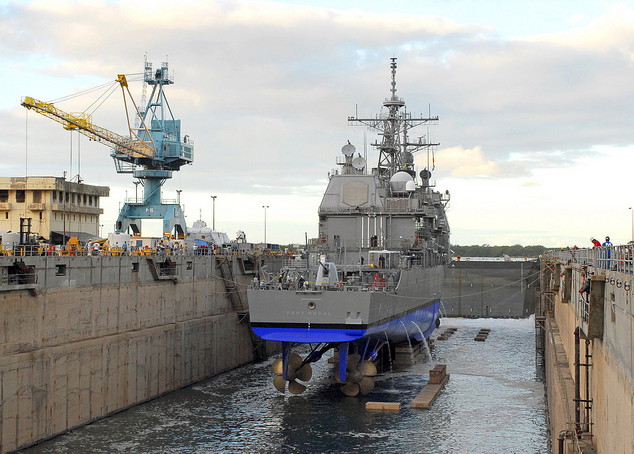 4:01 am on Tuesday June 28, 2011 | Posted by
USS Port Royal back in the water after grounding incident (update: our history)

Update June 28: We received feedback that many readers were unawares of the ship and for what its name.

The USS Port Royal (CG 73) is a Ticonderoga-class guided-missile cruiser ﻿and is the second U.S. Navy ship named to commemorate battles of both the American Revolution and the Civil War in the waters of Port Royal Sound and on the adjacent islands﻿.

The second was on November 7, 1861, when a combined Union Army-Navy expedition, under the command of Flag Officer Samuel du Pont, captured the island, which became the principal coaling and refitting base for the southern Blockade Squadron. — Yes, this marked the beginning of the Union's occupation of Beaufort for much of the war.

And you'll likely have noted that we mentioned that this not the firs USS Port Royal, that ship was a wooden 1,163-ton "double-ender" steam gunboat, built in New York City and commissioned in April 1862, seeing first battle in the Hampton Roads and James River areas in May 1862. However the ship spent little time in the waters of the Carolinas and was decommissioned in May 1866.

First reporting June 27: The USS Port Royal, whose namesake is the Battle of Port Royal, has been returned to active duty after a 2009 grounding incident that resulted in $40 million in repairs.

We of course bring this to your attention because of the Port Royal name.

You can check out a report on this out of Hawaii.

The ship now heads off to a seven-month deployment in the Middle East and western Pacific.