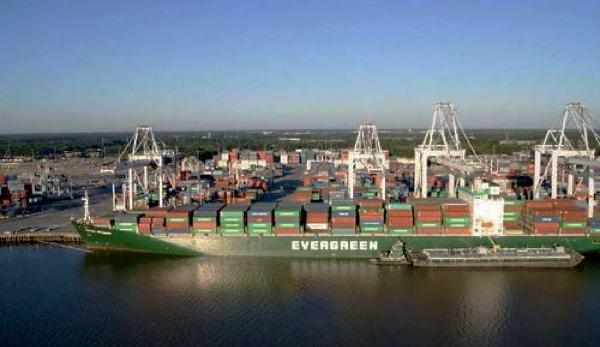 (Updated at the bottom with a pair of photos from the Coast Guard that show the spill and the enormity that are cargo ships.)

A fuel spill of some 2,000 gallons was released by a 965-foot container ship into the Savannah River between the Houlihan Bridge and the Talmadge Memorial Bridge on Saturday.

The vessel, Ever Diadem, overfilled a fuel tank at approximately 6:10 a.m. Saturday, October 1, and No. 6 fuel oil spilled onto the vessel and into the waterway.

The source of the spill was secured and approximately 6,000-feet of boom was placed in the river to minimize the spread of fuel. 2,080-feet of absorbent boom and a skimmer have also been deployed to recover fuel.

Coast Guard Air Station Savannah conducted over flights to assess the environmental impact and Coast Guard MSU Savannah personnel are on scene coordinating the cleanup efforts, conducting shoreline assessments as well as investigating the cause of the incident.

The Coast Guard urges mariners to use caution around the area.

An oil boom contains oils around the Ever Diadem.﻿

Oil is seen on the hull of the Ever Diadem.﻿