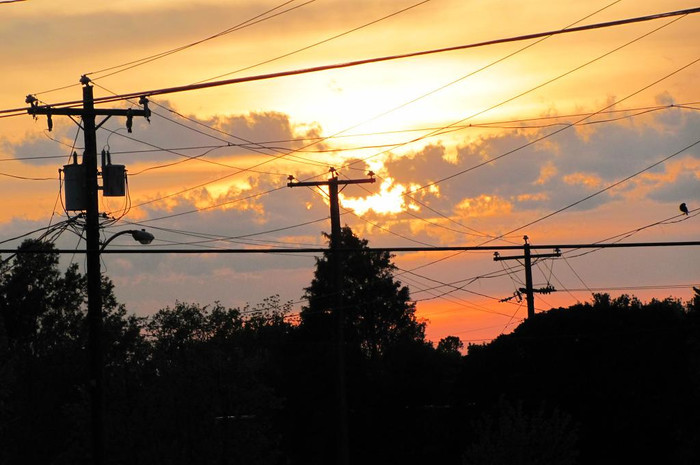 The sun is setting on this view, at least for part of Boundary Street.

Boundary Street's overhaul will now include a less cluttered skyline, thanks to an agreement between Beaufort, Hargray, CenturyLink to bury utility lines.

A deal had previously been reached to bury SCE&G's power lines in the Boundary Street Redevelopment Project.

Here are details from a press release:

“Together, we all agree that this is the right thing for the utility companies and the City to do,” Beaufort Mayor Billy Keyserling said. “We have a lot of construction ahead of us, but we are going to have a safer entrance to Beaufort. Putting these utility lines underground is a huge step forward.”

Hargray and CenturyLink officials said the costs of the project won’t be passed along to customers, and they will attempt to work with other utility providers to reduce related expenses.

“We are very pleased that, together, we were able to cultivate this partnership and create a win-win for the City, the community, and our customers,” said Chris McCorkendale, Vice President of Operations for Hargray. “We believe this is a great example of public officials working together with local business to strike a balance between prudence and progress.”

Major construction along Boundary Street is expected to begin next month after the primary contracts are awarded by Beaufort County.

“CenturyLink, a long-time community partner in Beaufort, is pleased that a swift and amicable resolution was reached with the City regarding the relocation of CenturyLink’s facilities within the Boundary Street Project area,” said Stephanie Cashwell, the company’s market development manager in South Carolina and Georgia.

“The agreement was achieved despite extraordinary time constraints and without imposition of any special charge or fee to CenturyLink’s valued customers in Beaufort,” she said.

Building a better Beaufort is the goal of a $30 million investment in Boundary Street to create a safer and more scenic entry to the city, provide better commercial and retail locations, and improve traffic conditions.

The project includes realigning the intersection of SC 170 and US 21 and is expected to last about three years. The Boundary Street Corridor work is part of a larger effort to reconfigure Beaufort from near the Marine Corps Air Station to annexed areas of Lady’s Island, creating a unified and connected neighborhood designed for people, not just cars.

Underground utilities not only improve the appearance of an area, but also are safer for motorists and are less likely to be damaged during hurricanes, thunderstorms or the rare sleet or snow.

In December 2011, the federal Department of Transportation awarded Beaufort a $12.6 million federal DOT grant to jumpstart Beaufort’s Boundary Street Master Plan with major roadway improvements at the intersection of highways SC 170 and US 21.

About $13.7 million in local money from the voter-approved penny sales tax originally designated for Beaufort road projects and TIF II will serve as match funding for the federal grant.

Under terms of the agreements, Beaufort will contribute up to $300,000 to Hargray and an equal amount to CenturyLink to help partially pay the costs to move their utility lines underground.

SCE&G agreed to advance the total costs of its share of the power line project – estimated at $2.9 million – and to be reimbursed by a 2 percent Special Franchise Fee District as it is collected.

The fee will affect SCE&G customers inside the Beaufort city limits. The special purpose fee won’t be added to utility bills by SCE&G until after the underground conduit for power lines is completed, estimated to be about six months to 12 months away.

The special purpose fee won't be added to utility bills by SCE&G until after the underground conduit for power lines is completed. The utility company's agreement with the City of Beaufort allows collection of such a fee for specific projects. pay someone to do your dissertation

Wow most important construction along Boundary Street is likely to begin next month after the main contracts are awarded by Beaufort County. custom essay writing service