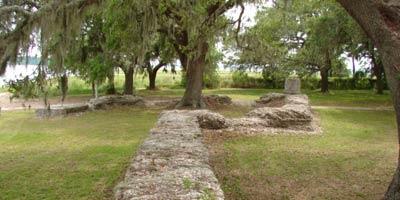 S.C. DNR
What little is left of the fort today.

Updated August 14: The Island Packet has an update from Naval Hospital Beaufort, which is promoting monthly tours of historic Fort Frederick.

Read up on that here.

If not, know that that the structure is regarded as "one of the largest tabby forts ever built" and was in operation from about 1735 to 1758.

Here's a synopsis from the S.C. Department of Archives and History﻿:

The Journal of the Common House of Assembly of South Carolina for January 21, 1726 stated that “in case of war the enemy might be attracted by the excellent Port Royal Harbor.”

By 1756, it had fallen into disrepair and was ultimately abandoned in 1758. A stronger defense, Fort Lyttleton, was constructed a little further up the river and Fort Frederick was deserted.

Part of the original fort is under the waters of the Beaufort River. The walls are the only visible remains of the fort and are in a sturdy but deteriorated condition. They are approximately 5’8” thick and 3-4’ high.

Today, however, that structure lies behind a guarded gate on the grounds of the Naval Hospital in Port Royal, with only regulated monthly access to the site. Now Port Royal leaders are saying it's time for that newer chapter in the fort's history to change.

The Island Packet has a rundown on the debate (and what you'd need to do to see the site under the current rules); take a read here.

If you'd like a thorough look at the fort's history, check out the Beaufort County Library's webpage.