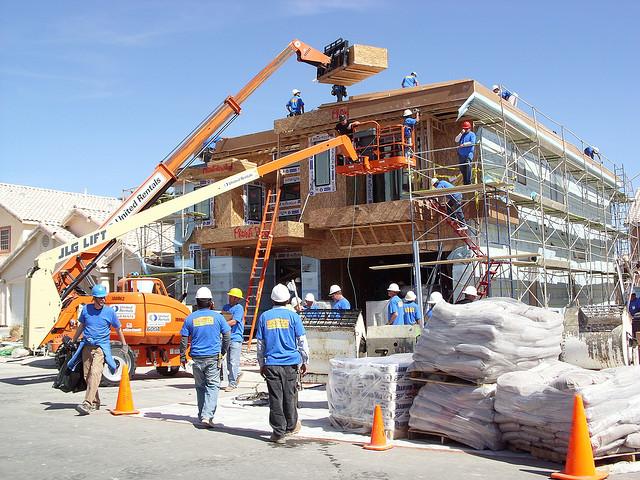 Flickr user JillOW
Expect a scene similar to this in Beaufort County soon.

Update March 9: Still no word on the official air date for the EMHE Beaufort air date.

The show looks to be on break until April 17, at which time the the new seasons' air dates will likely be announced.

Until then, stay tuned with us every step of the way.

Update January 11, part 2: The location and family have been unveiled; get the details.

Update January 11: We just saw on Facebook that an MCAS Beaufort-based Marine and his family is one of the finalists.

And they're due to announce the home sometime today.

The Island Packet  has a traditional writeup of yesterday's announcement. You can find that here.

WSAV also was out there, but no video online as of yet. Here's their coverage.

Just as they did with their Savannah project, the crew has a set up a website, Facebook fan page and Twitter account dedicated to the Beaufort County project. The links for all of those are below.

Of course we're anxiously awaiting to find out who the family picked is and where in Beaufort County this all will happen.

Reported December 21: Jealous of all the attention Savannah got when "Extreme Makeover: Home Edition" fixed up a house last month? Well be jealous no more.

The popular show with the "Move That Bus!" line is coming to Beaufort County to help out a deserving family that needs a better home.

No word yet on where in the county.

H2 Builders will be the lead company and will have one week to to pull it all off. No word just yet on the family or exact location, but it will all be going down starting on January 11th and ending a week later, and they're looking for help.

Here's all the gory details in press release form:

BLUFFTON, SC – One of America’s most popular reality television shows is coming to Beaufort Country, and, with the help of H2 Builders Inc., life for one local family will never be the same.

In early January 2011, ABC’s “Extreme Makeover: Home Edition” will join forces with H2 Builders to build a dream home and renovate the lives of a deserving Beaufort County family. H2 Builders owner Todd Hawk announced today that a press conferenceconcerning the build will be held today at 2pm in Room 156 at the USCB Bluffton Campus.

Citing the company’s founding convictions of quality, integrity and excellence, H2 Builders owner Todd Hawk says his firm is thrilled to have been selected to participate in this exciting and rewarding project. “‘Extreme Makeover: Home Edition’ is a natural fitfor H2 Builders,” Hawk said. “We’re both in the business of making dream homes come true.”

When it comes to the construction business, the process of making a dream homecome true usually takes months. With “Extreme Makeover: Home Edition” however, Hawk and his team of community volunteers will do it in the short space of one week. And though he does admit that tearing down one home and building another in a weekcan be a daunting task, Hawk said he believes that he, his crews and the people of the Beaufort County community - both North and South of the Broad - are more than upto it. “Coming together to help one of our own is something we know all about in the South,” he said. “It just comes naturally.”

Hawk also stressed that the lucky family who gets a new home will not be the only Beaufort County “Extreme Makeover: Home Edition” beneficiary. In addition to the “feel good” aspect of coming together for a good and common cause, communities wherethe show has filmed have reported a positive economic impact in addition to therecognition. “It’s a win-win-win,” said Hawk.

As with each “Extreme Makeover: Home Edition” build, all labor and materials must be donated, and Hawk is sending out a call to businesses and individuals across Beaufort County to step up and join him on this week-long journey to help ensure the success of making this home dream come true in Beaufort County.

Interested individuals or companies can find more information on how to volunteer time and resouces at www.ExtremeMakeoverBeaufortCounty.com.

About H2 Builders, Inc:With more than 30 years of experience and a continual commitment to excellence, H2BUILDERS is a custom home builder with a staff of professionals that offers its clients amultitude of services and cost savings unavailable from many other builders while alsoproviding clients with unparalleled personalized attention.