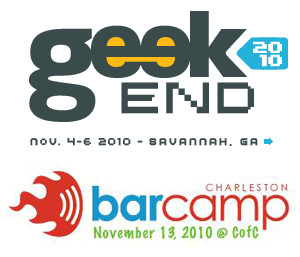 No, they're not in Beaufort, but Beaufort County does find itself smack-dab in the middle (geographically that is) of two November events that should resonate with all kinds of geeks, techies and dweebs.

What is Geekend you ask?

Geekend is the interactive conference phenomenon you have been waiting your whole life for. Geekend is your chance to interact with people taking the tech and creative industries by storm.

Join us this November as the brightest geeks, designers, developers, artists, and social media mavericks flock to Savannah for a weekend filled with cutting edge speakers, fun-filled after parties, and amazing networking opportunities.

This will be Geekend's second year, and the lineup is stacked. While the day sessions are filled with speakers who will challenge you creatively within the realms of programming, social media, graphic design and more, I think the keynotes are where Geekend kills it this year.

Here's the list of keynote speakers for the three nights:

There's still time to buy your tickets for Geekend2010. Check it out over at Geekend2010.com

Then, the weekend after Geekend, you'll have to head up to Charleston for the region's top 'un-conference,' BarCamp Charleston.

BarCamp is being held Nov. 13 at the College of Charleston.

It's the ad-hoc, user generated "un-conference" where those attending determine what will be presented throughout the day. Sessions, discussions, demos and interaction occur from everyone attending, not just a pre selected panel of speakers.

Want to see what sessions have been pitched and are the most popular so far? Then head on over to the BarCamp website where you can vote or even pitch your own session.

Some of my faves so far are:

And, unlike most conferences, BarCamp is only ten bucks!

BarCamp Charleston is typically geared towards technology topics, but considering all of the creative diversity in the Lowcountry, they are trying to broaden the scope and encourage all digital artists, writers, designers, non-profits, and more to participate.

Again, tickets are $10 and include admission to the after party, lunch, breakfast, and a t-shirt.

You also can check out our sister site in Charleston for more BarCamp coverage.