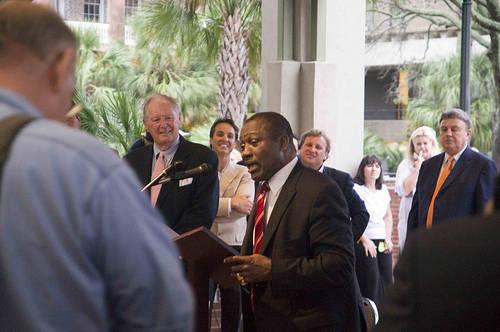 Joe Frazier during a Beaufort ceremony where he received the Order of the Palmetto.

Update November 8: Just a few short days after word came that Frazier was deathly ill, news has come that he has passed.

He was 67 and died Monday night after entering hospice care for advanced liver cancer.

As you'd expect, The New York Times has a nice obituary (read that here).

There will undoubtedly﻿ be local reaction to the news as well, we'll be sure to update you.

Frazier is being given only a short time to live.

The Post piece is the best spot to head for the scant information on Frazier's condition and a summation of his life; take a read here.

Last September he was in Beaufort to receive South Carolina's top honor, the Order of the Palmetto. Also late last year, a biographic film on Fraizer, ﻿"Joe Frazier: When the Smoke Clears", was released. You can see the film's trailer below.

For more on Frazier, in 2006, The New York Times did a nice feature on the man.

Should further news develop, we'll be sure to connect you.