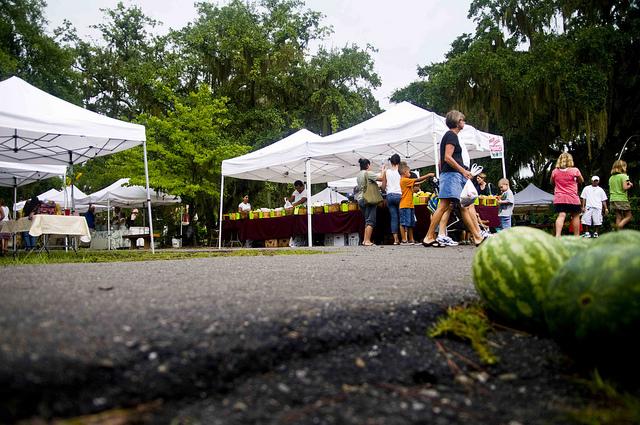 1:32 am on Saturday April 16, 2011 | Posted by Ken Hawkins
Beaufort farmers markets resume in April (update: Port Royal market is back)

Update April 16: The Port Royal Farmers Market is back today, April 16, and they're packing in some Earth Day celebrations.

Officially the market runs from 8:30 a.m. to 12:30 p.m. with its usual lineup of live music, food vendors from bread makers to farmers to fresh eggs. At 10 a.m. they're due to be planting a commemorative tree.

All that said, there's some serious rain slated for today, so if you're going to go hit the break in storms from 8 to 9 a.m. — otherwise I'd just plan to go next Saturday.

Update April 1: Spring is in swing and these updates are no joke: The markets are back.

Today the Habersham First Fridays start back up from 4 to 7 p.m. (details here) and the new market at Honey Horn Hilton Head gets going from 8:30 a.m. to 1 p.m. (website, profile)

There's loads more details below (as well as map links), but as a quick recap on other markets: The Port Royal market doesn't reopen until April 16th and the downtown Beaufort isn't all the way until May 4th.

First reporting: Spring is just around the corner, and the area farmers' markets are swinging into action.

Over at Habersham, where the market has pulled through winter like a champ, the Friday markets have been getting progressively more active as the temperature climbs. And come April 1st, the First Friday markets with live music, more fanfare, and merchants are back on. Generally 4 to 7 p.m.; map.

In Port Royal, the Saturday markets start back April 16th. The market near the Naval Hospital often has live music and many farm and other food vendors — it's pictured at the top. 8:30 a.m. to 12:30 p.m.; map.

Oh, and down on Hilton Head, they're getting a new farmers market come April 1st at Honey Horn.

The downtown Beaufort Farmers Market is due to resume in April, though we've yet to hear an official date. That market is generally on Wednesdays.

Update March 11: The Island Packet has posted a similar report and notes that the downtown Beaufort market will return May 4th.