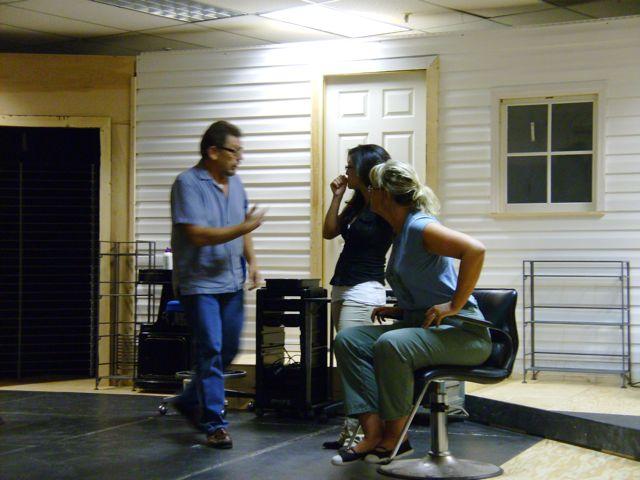 Update November 21: Well, folks this is it. Sunday, November 21, at 3 p.m. is the final show. And if your on the fence we've got a video link for you.

Sarah Welliver over at The Island Packet went to the show and sat down for a chat with Maggy Norden (Clairee) and Anne Errington (Ouiser) about the show and its production; take a gander here.

You can get tickets for $15 online.

First reporting: “The play is beautifully constructed,” actor Gail Westerfield
commented, “which makes acting it so much easier for me. I spent a lot of time
figuring out who M'Lynn is and why she does what she does, which is all
basically there for me in the script.

"Sometimes I realize that we have an
uncomfortable number of traits in common, actually! But that's fine, it helps
me make her real. Every rehearsal, I feel I understand her more. Working with
JW Rone is terrific— he gives me plenty of room to explore and make choices, if
you'll indulge a little actor jargon! M'Lynn is pretty uptight, but I spend a
lot of time in rehearsal cracking up, I must admit.”

Steel
Magnolias was on stage before it became the famous ensemble cast movie in the
1980s. It’s set in a home based beauty salon with the slogan “There’s no such
thing as natural beauty,” but playwright Robert Harling most assuredly meant
the opposite, with his cast of characters so admirable that they went from
stage to blockbuster to the hearts of countless fans.

“There
may be some risk, but that’s true for anyone...”

The story of Steel Magnolias hinges on the eternal
question of when and how to have children, and the sad dilemna of when health
and happiness are at odds: “I’d rather have thirty minutes of
wonderful, than a lifetime of nothing special…”

“The
cohesiveness and chemistry of the cast is so good, we’ve all teared up almost
every night since auditions,” said Erika Pyle, stage manager. “The story
portrays relationships and generations, and it shows how important friendship
is through good and bad. I love that about this story, it’s true and simple and
speaks to your gut. I know all the lines from the movie, and these actors are
doing a really good job.”

“If
you don’t have anything nice to say…”

"I’ve been dreaming about having a role
in this play since I saw it off-Broadway a  few years before the movie came out,” said castmember Maggy
Norden. “And now, I got all the good lines, in the role of Clairee— I was
born to play this part, I’ve been quoting her for twenty years.” Maggy brought a tray of pecan tassies to share
during rehearsal, “Clairee likes to cook,” she explained.

Keeping
with the theme of beauty, Hope Cribb and Brittany Melvin from Bangs Salon
provide hair consultancy, assisted by Debbie Anderson. “One of my clients was
talking about the production,” said Hope. “They needed some help, and I thought
it would be neat and fun and different. I love the movie, and Julia Roberts.
The castmembers are going to come over to the salon, and we’re going to play
with some styles. There will be some big hair, lots of curls and teasing and
hairspray.”

You can buy tickets online here.

Tickets
are on sale now at ArtWorksInBeaufort.org and 379-2787, and at ARTworks, where
the black box theater was renovated just in time for Truvy and friends.
ARTworks is the home of the Arts Council of Beaufort, Port Royal and the Sea
Islands, which applies the many creative tools of The Arts to strengthen
artists and to enrich audiences, collectors, and visitors through high quality
arts experiences and arts education programs 365 days a year.