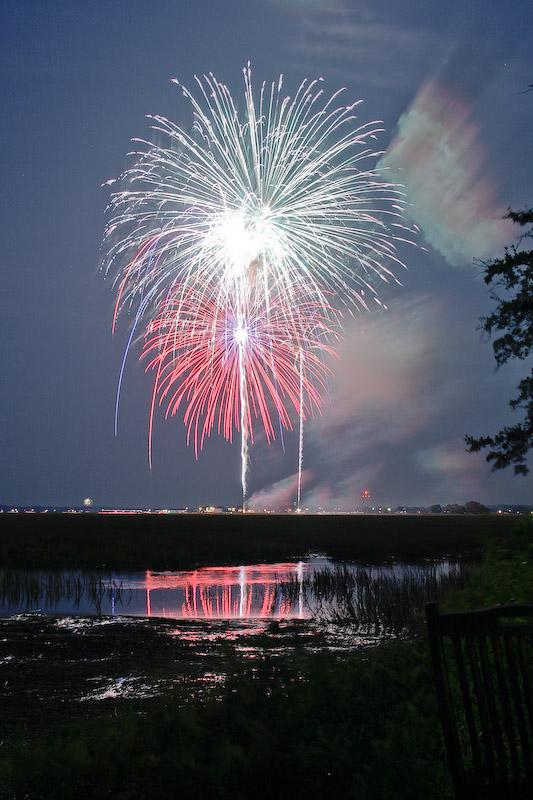 5:09 am on Sunday January 1, 2012 | Posted by Ken Hawkins
Fireworks, more in the park as Beaufort's Tricentennial ends (Update: Coverage)

Update: Happy New Year and an end to the 300 year celebration of the founding of Beaufort.

The Island Packet has a nice report and pair of photo's from last night's event; check 'em out here.

There's also a few photos on the event's Facebook page.

First reporting: Beaufort will end its Tricentennial year much as it be﻿gan, with fireworks and a party at Waterfront park.

Starting at 4:30 p.m. in the Henry C. Chambers Waterfront Park, the closing ceremony will end at sunset, around 6, with the bang of booming fireworks over the Beaufort River.

"This is a birthday celebration for our wonderful city, not just to celebrate its founding in 1711 but also to kick off its fourth century of progress," Beaufort Mayor Billy Keyserling said. "We want this to be a family affair and we'll end early enough so people can go out to dinner or get home for New Year's Eve festivities."

Between musical productions, the three readers will present brief snapshots of Beaufort's history, including the city's humble beginnings in 1711, economic growth and wars.
Beaufort was founded in 1711 by the English, although its beginnings date back to Spanish explorers in 1514. Beaufort was named for Englishman Henry Somerset, Duke of Beaufort (1684-1714), one of the Lords Proprietors of Carolina. It was on Jan. 17, 1711, that Beaufort's formal charter was created.

During the closing ceremony, shirts, hats and other memorabilia with the unique Beaufort Tricentennial logo will be sold at a special booth.

Also, organizers of the Beaufort 300 project are in the final stretch to raise funds for new historical markers in the Waterfront Park. For a $300 investment in Beaufort's future, donors' names will be featured on permanent historical monuments in the park commemorating the Tricentennial. Corporate and non-profit sponsorships also are available. For details, call Erin Dean at 524-1116 or visit www.cityofbeaufort.org.

Throughout the year, numerous activities have spotlighted the city's history, including the first Founders' Night on December 31, 2010, a "birthday party" featuring the Parris Island Marine Corps Band on Jan. 17, recognitions by area festivals and a November production by Beaufort County public school students that raised money for the Beaufort 300 fund and for teacher mini-grants.

In the event of rain on December 31, the event will be moved to The Arts Center at Beaufort High, located on Lady's Island.

The businesses that once helped make Beaufort what it is