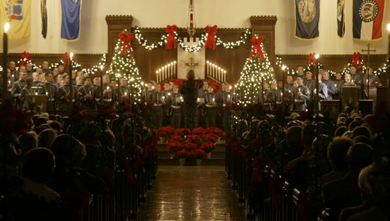 Citadel Chorale
The choral at a 2009 candlelight performance.

Update January 31: Heading out tonight or on the fence? Well, know that there are a few dinner promotions going on tonight to complement the event.

Southern Graces at the Beaufort Inn is offer a three course $25 special fixed price before or after the concert.

First reporting: As the Parish Church of St. Helena continues its Tricentennial Celebration﻿, you'll be able to benefit from a free concert by the Citadel Chorale — an all 36 voice male group.

Founded in 1976, the Citadel Cadet Chorale is the Citadel’s official touring choir and members are selected by competitive audition.﻿

To commemorate the Citadel’s bicentennial that same year (1976) a select group of singers formed the “Original Thirteen” to represent the original thirteen colonies. Both of these groups perform music of all types, including patriotic, sacred, popular, and classical music, as well as novelty and show tunes.

The Cadet Chorale is directed by Mrs. Nancy Lefter, Director of Choral Activities at the Citadel, and is accompanied by Col. Mark Bebensee, Associate Provost for Academic Affairs.

The Parish Church of St. Helena is located at 505 Church Street, in downtown Beaufort﻿, just a few blocks from the Waterfront Park.

As the 300-year celebration continue many more events abound, in part: