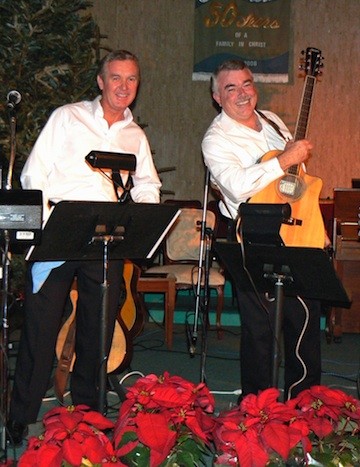 2:16 am on Wednesday December 4, 2013
A Celtic Christmas concert on Thursday

Here are more details from a release:

Harry O’Donoghue and Carroll Brown are proud to present their  Celtic Christmas Concert, a lively program filled with Spiritual, Celtic, and traditional seasonal songs, complimented by stories and Irish recitations. Joining them again this year will be the extraordinary talents of keyboard player Michael Murray to round out the sounds of the season.

Carroll Brown is a gifted acoustic guitarist and singer/songwriter from South Carolina. With over thirty five years in the music business he possesses a wealth of musical knowledge and a vast repertoire of songs and stories. Carroll performs around the entire southeast at festivals, pubs and events and hosts annual tours to Ireland. (www.carrollbrownmusic.com)

Harry O’Donoghue comes from the east coast of Ireland. Performing professionally for nearly thirty years, he is a talented musician and has become a master storyteller and folksinger. Now living in Savannah, Harry co-produces and hosts the popular Green Island Radio Show for Georgia Public Broadcasting and leads multiple annual group tours to Ireland.  (www.harryodonoghue.com)

Together they bring to the stage a gently paced acoustic show, drawing on their roots to offer an eclectic Holiday program of traditional, Celtic, original, spiritual, folksy and spoken word pieces.

The onstage atmosphere is casual and conversational as the gentlemen banter easily between themselves and the audience. Join Brown and O’Donoghue for a delightful evening of acoustic music, song and story.

The Sweetgrass Angels are a match made in heaven by way of The Beaufort Theater Company. Velma Polk, Penney Lynn Smith and Elaine Lake first met and bonded at the auditions for USCB's production of 'The Honkey Tonk Angels' last September and have been weaving their classic 3-part harmonies together ever since. The Sweetgrass Angels sing songs from the 40's thru today, Disco, Beach, Shag, Country and Gospel. They perform regularly throughout the Lowcountry and beyond.