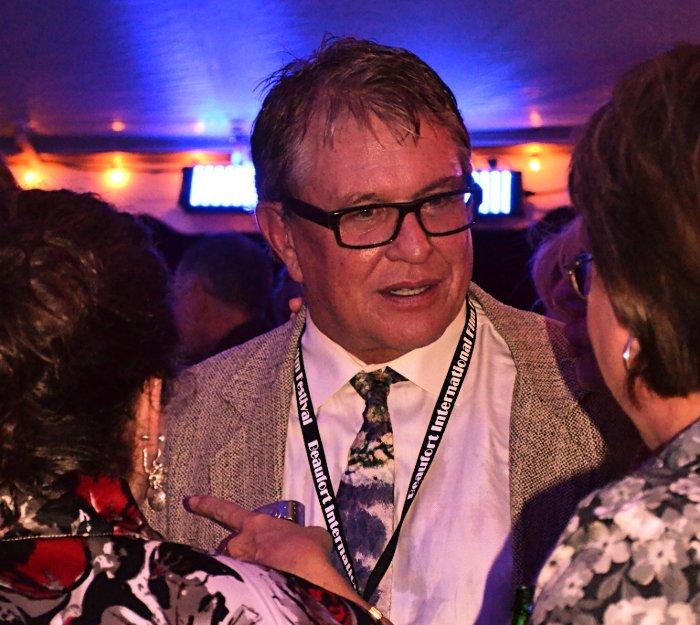 1:47 am on Thursday February 16, 2012 | Posted by Allegra Craig
A record crowd for the Beaufort International Film Festival Opening Ceremony

As tonight's attendance shows, the popularity of the Festival has grown considerably. In 2007 -- the Festival's inaugural year -- attendance was around 500; while last year they topped out at around 5,000. And if tonight is any indication, attendees will fill the 500-seat auditorium -- up from just 163 last year.

President and CEO, Ron Tucker, was thrilled with what he called, "the biggest turnout" in the Festival's six year history. Mayor Billy Keyserling shared his enthusiasm for Independent Film, explaining that the Festival is one of those events that "keeps Beaufort small but cosmopolitan," and encouraging independent film-makers to talk about making more films here in Beaufort.

Berenger, who presented at last year's award ceremony, would like to bring more celebrities to Beaufort's festival. While working in Romania with Boothe on Hatfields and McCoys, Berenger brought up BIFF. Explaining that it would be more "laid back" and fun, "not like Cannes." Boothe -- with no work commitments during the Festival -- committed to the opportunity. He will be honored with the Jean Ribaut Award for Excellence in Acting. In the meantime, Berenger is working to raise awareness among more of his fellow actors, taking advantage of the unique access he has to bring BIFF into the spotlight among his colleagues.

Three features will be screened at this year's festival -- including  Santiago -- from Mexican Director Felix Martiz;  Italian film, The Duck Hunter; and Happy New Year. Additionally, a number of student films, short films, and screenplays will be showcased.

Kate Zalusky, a Beaufort Film Society member and Beaufort local, has been with BIFF from the beginning. She has watched every single film screened, and will do so again this weekend. "I look forward to it every year," she explains. The films are "compelling," and she credits the screening process with how much she enjoys most of the films. Since 2007, Zalusky expressed that the Festival has only become "more professional."

Other viewers express how much they appreciate BIFF being right here in Beaufort. "How else would someone from Beaufort have this opportunity," Eileen Beaucaire expressed. She loves the documentaries, since it provides her with a chance to learn from all over the world and exposes her to a "new part of film."

Diane Voge, another Film Society member, expressed her delight that there is always someone -- be it a writer, director, or producer -- who is present at the screening to field questions and discuss the film with viewers. Her favorite films are from the Student Film category. "They are always entertaining," she explains.

Filmmaker Jocelyn Rish's short, "Saying Goodbye" was chosen to be screened this year. Inspired by Oscar, the death-predicting cat, her film is about one woman's journey to accept a cat who predicts the deaths of patients in the nursing home where she lives. Rish is a South Carolina local, residing in Summerville.

Also local -- from Beaufort, in fact -- is Screenwriter Teresa Bruce. Her dark drama, The Mask of the Innocent,  won at Oaxaca Film Festival in Mexico. This year her screenplay, "The Wedding Photographer" has been selected for reading. Departing from the dramas she is attracted to, she is testing the waters with a romantic comedy about a fictional wedding photographer in Beaufort who thinks he's too good to be photographing weddings.

Tickets are still available for purchase. Visit the Chamber of Commerce to purchase. A schedule of events can be found on the Beaufort Film Festival website.

For a look at the night in video, check out WTOC 11's report here.