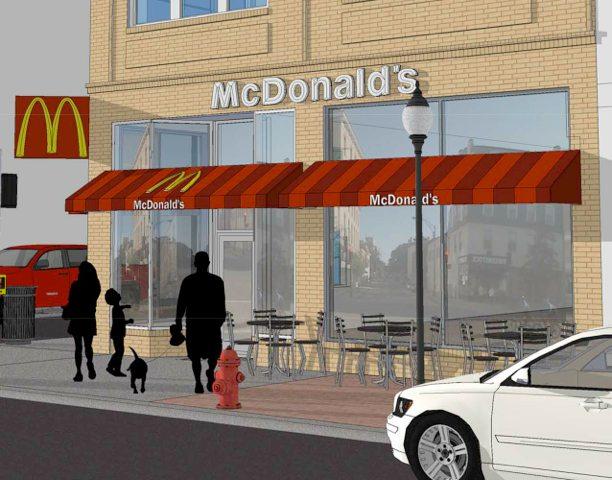 12:56 pm on Friday March 2, 2012 | Posted by Ken Hawkins
Plans for McDonald's on downtown Savannah shopping street; What about Beaufort?

Plans are moving ahead to build a non-drive through McDonald's on historic downtown Savannah's iconic shopping street, Broughton Street﻿, and they're not without controversy.

The McDonald's Corporation is planning to put in a McDonald's restaurant, complete with walk-up window, at the corner of Broughton and Jefferson. The plan is to take over the 246 West Broughton St., a building that has been unoccupied for over ten years.

Nikita Carpenter, a second-year film and television major, born and raised in Savannah said, "Here's Broughton, a main street of our beautiful city, peppering itself with respectable, enjoyable dining spots. It does have a Fuddrucker's, B&D [Burgers], and Starbucks, which are all chains. But, I can forgive those places because they feel homey. To me, McDonald's never felt homey. They've always been alien with their sterile settings and bleached odor. It's industrial in the worst sense."

It's expected that a building permit could come as early as March.

Of course, that's all Savannah news, what's an interesting pondering point is if something like this could work in downtown Beaufort, and would it be allowed?

We already saw heavy concession be allowed for the development of an Olive Garden-Red Lobster restaurant on Boundary Street, and Beaufort is efforting infill development and has a growing college student base, and has it's own struggle with unused storefront space.

So what do you think? Could you see a fast food joint on a downtown side street with a walk-up window attracting more visitors and late night revelers to downtown, along with investment dollars?

Or maybe one in the redeveloping Bladen Street area? Or is any non-local establishment within the core downtown area — be it McDonald's or Fuddrucker's﻿ — sacrilegious﻿?

Update March 2: A quick update to note that the Broughton Street location is happening.