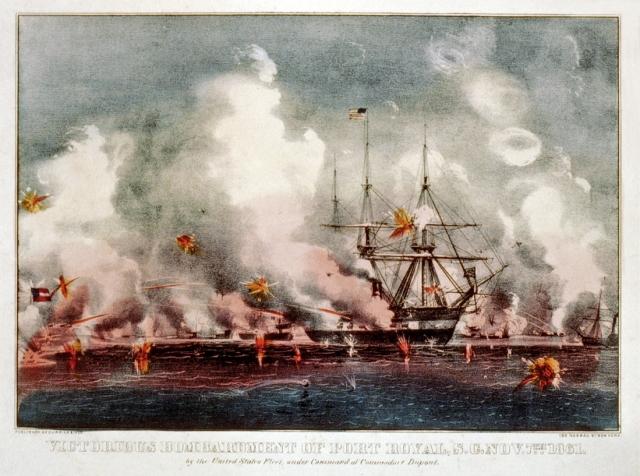 5:37 am on Monday November 14, 2011 | Posted by Ken Hawkins
Recalling the Battle of Port Royal, and the 'rehearsal for Reconstruction'

Update November 14: While the first report below is still a great account and perspective on the Battle of Port Royal that just marked 150 years on November 7, The New York Times has also posted a great account of the battle and the aftermath, aka, the "rehearsal for Reconstruction."

Within hours, Confederate troops had abandoned the forts, allowing Union forces to take control of the sound and the barrier islands that surrounded it, including Port Royal. The local slave owners and planters soon abandoned the island, leaving behind thousands of slaves.

Union soldiers, profiteers, government agents and missionaries quickly moved into Port Royal. Some took advantage of the situation for their own gain, but others tried to organize the ex-slaves into self-sustaining citizens to prove that a system of free labor was better than slavery. What began as a Union effort to establish a Southern base for its naval blockade soon became "the Port Royal Experiment," or, as the historian Willie Lee Rose called it, a "rehearsal for Reconstruction." ﻿

First reporting: The Battle of Port Royal﻿ lasted just a few days from November 3rd to 7th of 1861, and it lead to the early capture of the Beaufort-Hilton Head area during the Civil War.

But the outcome may have been far different had it not been for Charles O. Boutelle of the United States Coast Survey.

He had spent many years mapping the regional waters and was able to help the Union make the most use of the exceptionally high tides that week, an action that may well have effected the outcome of the battle.

A map of the battle (click to enlarge).On Boutelle's arrival, Fleet Captain﻿﻿ Captain Charles H. Davis  wrote to his wife: "He was very welcome; nothing could have supplied the loss of his knowledge of the ground. He made the triangulation, the groundwork of the survey, of the whole coast of South Carolina, and he possesses a taste for topographical details, and a faculty of observing, and, so to speak, of interpreting them, which are truly wonderful. He lives with us in the cabin.... The first thing after breakfast was to send for the other generals and have another council of war. The generals talked over the matter with Mr. Boutelle, while Du Pont and I wrote without cessation, preparing the final orders.... Mr. Boutelle answered all their questions and removed all their scruples, and they came heartily into the new plan of operations. He satisfied me upon the only point about which I felt anxious; that is, the easy and certain entrance of this ship [the U. S. S. WABASH, Admiral Du Pont's flagship] into the place."﻿

The Island Packet has a nice profile of the man and the battle (take a read here) and NOAA has a long account of the battle (read that here).