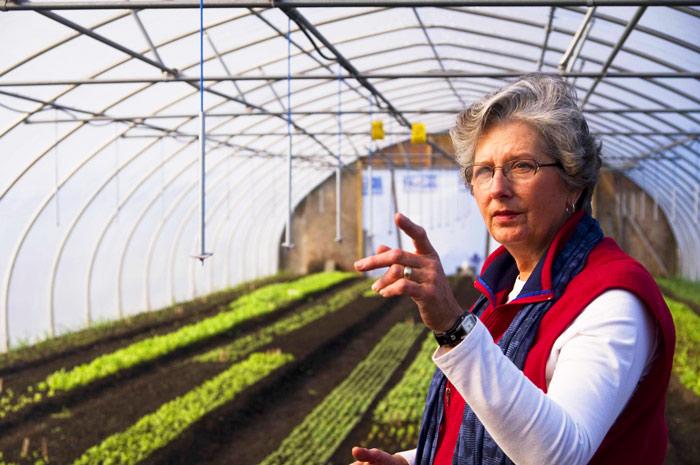 8:43 am on Sunday December 12, 2010 | Posted by Ken Hawkins
Growing naturally on the Brant Family Farm

Photos by Ken Hawkins/TheDigitel
Susan talks about the cold house that they hope will allow them to produce throughout the winter.

Susan Brant points to several neatly laid out rows of garlic, onion, and various leafy greens while talking to a few visitors about how the seeds are planted and the produce harvested.

Outside the temperature hovered in the mid-50s, but where Susan was speaking it was a balmy 80 inside a cold house that is wrapped in translucent plastic and warmed solely by the sun.

On this particular day, she and her husband, Don, are entreating a group of customers visiting the Brant Family Farm's fields near Grays in Hampton County. Some 50 people had taken them up on an offer to peek inside the family's house and enjoy an afternoon picnic by the pond.

When the Brants decided to start an organic farm, they thought it would be fulfilling and not nearly as difficult as everyone had been telling them. After all, as a teenager, Don had spent years helping harvest hundreds of acres of row crops. How hard could 8 acres of organic crops be?

Three years later, the Brants are still getting to know the natural growing process with their 3 to 4 acres — still a good distance from their goal of 8 acres. A reality that allows them to readily admit organic farming turned out to be just as difficult as everyone told them.

"We have come to find that organic farming is more than work, it is a lifestyle that requires 110 percet commitment," says Don. "It is a whole new mindset from where we, as a culture, are today, which is fast, faster and fastest."

Don stands with a tractor on their farm.

Their crops are not only grown without herbicides, pesticides, and chemicals, but the soil must be worked in a way different to conventional wisdom. "You have to amend the soil by adding compost, manures, and so on to increase the organic content and bring up bacteria and microbe content."

For all the hard work, the Brants couldn't seem happier.

Even when Don talks about working in the rain and in 100-degree plus temperatures, he is far from complaining — there's too much pride in how talks of toiling in chemically untouched soil and watching the fruits of their labor grow by their own hands.

"It is not so much of what's been best or most difficult," Don says. "But an overall lifestyle … A mindset change from where we have been to where and what we believe God has called us to do."

When they harvest one of their dozen varieties of lettuce, heirloom tomatoes,  blueberries, strawberries, pears, plums, figs, apples, sweet potatoes, fingerling potatoes, red potatoes, yellow potatoes, and a whole lot more,  they feel they're not just offering lettuce to someone. Each bag of produce contained a bit of their organic lifestyle.

You won't find the Brants peddling their crops to wholesalers either. Instead, they regularly make the drive to Beaufort County where they sell their produce at area farmers markets and a group of some 150 reserve produce in advance by e-mail.

Their method is small scale, quite local, and they're very excited about it.

Although the Brants say they're "getting the hang" of organic farming, they're excited for what the future holds. Recently, they hired two interns to learn their trade and to help them accelerate production and harvesting. Don also mentions adding a second cold house to ensure that they can keep producing during the colder winter months. And in the near future, they will add a dozen chickens to their brood.

For the sake of full disclosure, I am a little biased: my wife and I are customers, and, in our opinion, the Brants' produce is some of the best produce we've ever had.

If you'd like to get to know the couple or to purchase some produce, they regularly visit Habersham, Port Royal (Saturday was the last one of the season), and Bluffton farmers markets. You can also join their e-mail list to reserve produce at one of their area pick-ups, by e-mailing dhbrant@gmail.com.