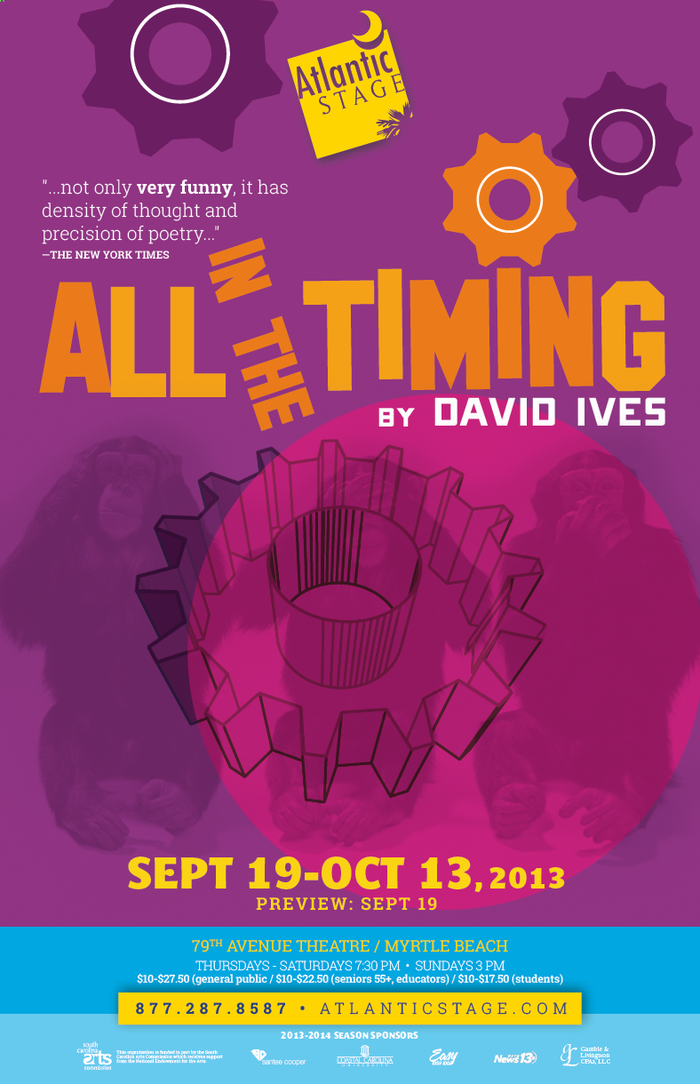 All in the Timing by David Ives opens another season at Atlantic Stage.   All in the Timing is a critically acclaimed, award winning evening of six one-act comedies that NY Times describes as, “…not only very funny, it has density of thought and precision of poetry…ALL IN THE TIMING is by a master of fun.  David Ives spins hilarity out of words.”

All in the Timing takes the audience into everyday, relatable, circumstances that everyone has dealt with.  In each act a bell ringing is the chance for the character to repeat the scene with a new approach.   “It gives the characters the opportunity to have the do-over we wish we would’ve had,” says Penn relating the scenario to that second chance many people wish for.

The laughter begins with a preview on Thursday, September 19 and opening night celebrations will take place on Friday, September 20 with a wine and cheese reception following the show.   The laughter continues through October 13, giving everyone an added week to see the show!  In addition to a fourth week, $10 budget friendly side seats are available.   Also new this season is the addition of handrails in the center section stairs and the side sections.

All in the Timing show dates and times

Sunday, September 22 @ 3:00 pm (Followed by talk back with cast and director)

Sunday, September 29 @ 3:00 pm (Followed by talk back with cast and director)

Sunday, October 6 @ 3:00 pm (Followed by talk back with cast and director)

Season subscriptions, flex passes, and individual show tickets can be purchased online at www.AtlanticStage.com , by calling the box office at 877-287-8587, or by stopping by the theatre during box office hours.   TheAtlantic Stage is located in the Coastal Carolina University Myrtle Beach Education Center on the corner of 79th Avenue North and Bypass 17.   Box office is open Tuesday, Wednesday, and Thursday from 12 pm to 4 pm.

Atlantic Stage is a professional, nonprofit theatre whose focus is to enhance the cultural landscape of the Myrtle Beach area by providing quality theatrical productions of classical, contemporary, and new works that are entertaining and enlightening. Atlantic Stage is an ensemble of professional resident artists committed to artistic excellence, community enrichment, and educational outreach.

Head to the source at atlanticstage.com
Advertisement